Question: A Career You Would Never Take? 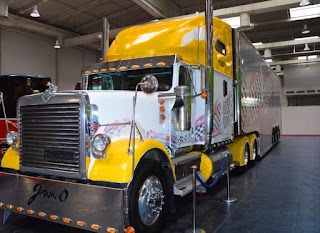 Now obviously this could be a long list, but I'd say trucker. Mainly because I do admire things truckers do. You'll make enough where you'll never be in poverty, demand is high, and you're often left alone from other people. I just could never drive something that big and for so many hours. There's a few places where I can't stand driving a sedan, let alone one of those things. My maternal grandfather was a trucker, but I don't think I got those genes in me.

What career would you turn down?
Posted by Adam at 11:00 AM

I would never become a butcher!!

Oh yeah, I could never do that, especially in the snow. My friend growing up, his dad was a trucker and they were pretty poor and he was almost never home. Didn't really seem worth it.

I don't think I would like to be a cashier, front of the line, stressful I imagine

I would not want to do any job where vomit or other bodily wastes are involved. So that crosses off being a parent or doing anything in the medical field.

I could never work in a lab that tests on animals! I'd probably set them all free.

TBH, if push comes to shove, there's not a job I wouldn't do. I mean...the end justifies the means and all that:D

I'd turn down anything having to do with nursing or patient care. I just don't have the patience for it.

A nurse, or anything in a hospital or nursing home setting. -Jenn