Question: Should Women Be Drafted Too? 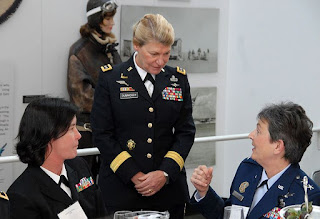 President Obama has sparked new debate on whether women should be included in the draft or not. While there hasn't been a draft since Vietnam, all males are expected to put themselves in the list when they turn 18. I honestly think there shouldn't even be a draft. A war that can't support itself on the amount of volunteers is not a war we should have begun. How many conflicts were pointless instances started by old men far too old and powerful to ever have their boots on the ground? It would be ironic if Donald Trump started a draft considered he dodged the draft for Vietnam. But I'm a big believer in equality, and if men are subjected women should be too.

Should women be drafted into the military?
Posted by Adam at 11:00 AM

Nobody should be drafted!

No draft for anyone!

Here all men need to do it, and women can volunteer to do it, but to be honest I haven't

Nobody should be forced to fight in a war!

I'm with you, I don't believe in drafts.
When there's children involved, one parent should be exempt if a draft is in place, whether it's the man or the woman, to my way of thinking.

I think enlistment should be voluntary- male and female.

No draft for anyone! I do not support this.

I don't believe that the USA has a draft anyone at the moment.
So what's the big deal?
As women these days want full equality then what's "good for
young males, should apply for young females". N'est pas!!!

As for Trump..... well nothing would be a surprise. He has
already made a diplomatic faux pas with Taiwan. Sent the blood
pressure in Beijing through the roof. Obviously as expected he has
not a clue of history, the USA and most western nations, dropped
diplomatic ties with Taipei in 1979 but did keep in touch via Trade
Missions which are de-facto diplomatic!
What a nutter the US has in command, then again Trump with his brilliant knowledge of the World probably thought that he was speaking to someone in one of your "T" states - Texas of the brash
or Tennessee of the Hillbillies????
It was interesting to note the responses from other SE Asian leaders
on this "diplomatic" blunder - Tokyo, Jakarta, Singapore, Bangkok and Canberra etc.............. NO COMMENT and that head shake - ha ha!
Colin

Either we have equality of the sexes or we don't. If males need to register for the draft, so should women.

I don't think anyone should be drafted. One should only fight for causes they believe in.