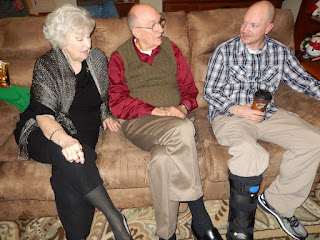 Politics at Thanksgiving is a common subject and we saw very little of it during ours thankfully. However my brother Brandon, my grandmother, and her boyfriend Howard were very happy about the results of the November election as they were bragging during the Christmas Eve gathering. Not unlikely of them either as old southerners are extremely conservative. And my brother Brandon (he's in the Army) came out of basic training radicalized with far-right ideologies and Christian fundamentalism. I was luckily down the hall with my nephews and tried to ignore the babbling. I am still concerned for our country as I have seen all of Trump's cabinet picks. The presidential cabinet looks like it's shaping up to be a league of super-villains. Every pick seems to be someone who is the antithesis to what they're suppose to be running.
Posted by Adam at 7:00 PM

Well, you know, of course, that I disagree with your views on Mr. Trump...and his cabinet picks...in my humble opinion, our country has had waaay too much of politics...we need some people helping to get this country back in shape that have never held political offices. We need term limits for Congress...among about a hundred other things that Obama led us into...
And on a brighter note, I hope you and Daisy had a good Christmas.

Well, at least you didn't get into a fight! Sometimes political or religious discussions leads to that.

we must have hope.

Politics in the USA must be such a difficult topic to discuss right now, and probably for the next four years. Good on you for keeping the peace. I wouldn't have been able to keep my mouth shut!

Thankfully, there was no politics talk at Thanksgiving or Christmas this year in my family. Good for you for staying out of the discussion. Sometimes those talks can get ugly!

Playing with your nephews sounds much more fun

Even though we are Canadian, I put a ban on talking politics at our Christmas gathering. It was much more enjoyable that way. -Jenn

Ha ha - I'm glad that Canadians are getting a laugh or maybe
a bloody horrible scare out of the selections.
The whole world watches in awe!
Far right wingers, bible bashers, bigots, racists, billionaires - what a motley collection.
Those who saw Trump as a "savior" will be in for the greatest shock of their lives.

As the saying goes - "Could only happen in the USA".
My profound sympathy for the people of the USA.
Colin

You did the best and most important thing on Christmas, being with your young nephews (they have the (America's) future, haven't they?), staying away from the grown ups' bragging and politics.