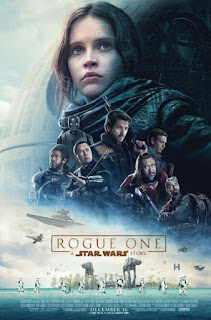 Star Wars' Rogue One is something that came out of left field for me. I assume many of the people who were looking forward to The Force Awakens were a little shocked we'd get another Star Wars movie a year later. Except it's not Episode 8 but rather Episode 3.5...or at least kind of. Set after Revenge of the Sith but before A New Hope, this film focuses away from Jedi and on a team that was suppose to have taken the Death Star plans from the Imperial Army so the Rebellion could destroy the Death Star. I tried to ignore all opinions as I wanted to be unbiased. But I heard it was good and after watching it I read some people say it was better than any other Star Wars ever. Can it really be that great? 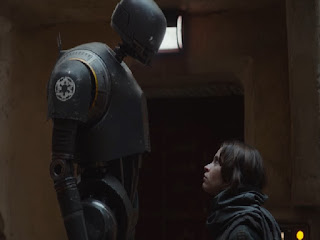 The hero is the story like The Force Awakens is female. Her name is Jyn Erso and her father was taken by the Empire for "scientific research" because his mind was so brilliant. Her father told her to flee which is what she did. Living the life of an outlaw, Jyn Erso becomes quite the warrior herself. While she's never held a light-saber, she's quite a good marksman with a blaster. She is rescued one day by the Rebel Alliance who seek her help. Her companion is Cassian Andor who does rather "dark" things for the Rebellion. With him is K-2SO who was built by the Empire but changed to serve the Rebellion. And because of the changes, he has quite the sense of humor and personality. 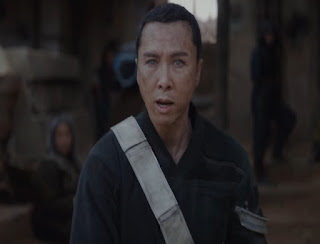 More warriors turn to help and join the team with Jyn and Cassian. One of them is Chirrut Imwe who is a blind man who uses The Force to be almost like a Jedi but without the laser sword. His partner Baze Malbus is a rough mercenary who prefers conventional warfare than trusting in The Force. They hear that Jyn's father Galen Erso is still alive and that he sent a message about the new Death Star that he co-created. He planted a secret in it, but it's up to Jyn and her crew to figure it out. Will they complete their mission or will the Empire destroy them all? Even the great Sith Lord Darth Vader lurks in the shadows. 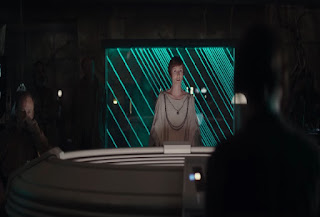 I can actually say with a lot of confidence that I was greatly disappointed by Rogue One. Some people acted like this was the most amazing film ever but I thought it was only good. The directing and production is better than the prequels but I think the story in all the other movies is better. The ending is predictable so I wasn't shocked either. I think the film's biggest problem is that the characters aren't that compelling. They try to hint a love story but it goes no where. They have funny lines but there's not much character progression. Even the last scene with Darth Vader didn't make up the difference. The Force is with this one, but the midichlorian levels could have been much higher than that.

I can actually say with a lot of confidence that I was greatly disappointed by Rogue One. Some people acted like this was the most amazing film ever but I thought it was only good.

I haven't read your review, Adam, because I am not going to see the movie until Boxing Day. And I know you give very thorough reviews. I'm such a Star Wars fan it will probably be AAA+ to me.