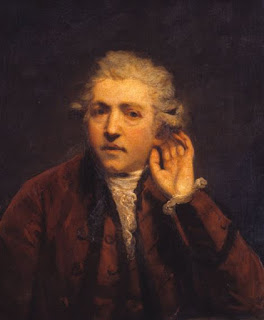 When I was little I had learned about the existence of deaf people. There were none in our family so I think I heard about it in school. I never saw the word written, so when I first talked about deaf people to others I called them "death people" as the word sounded so similar. It's common for the human mind to make up what they heard when they didn't hear something correctly. My brother Zach harshly criticized me for it. I felt very small. That was the pain of being the youngest, you always felt like only you made the mistakes. I'm sure Zach said some stupid crap like that when he was younger than me.
Posted by Adam at 11:00 AM

Guaranteed, Adam! Siblings can be a royal pain at times. And it's amazing how long and how clearly you can remember those sibling stabs! My mind is getting increasingly creative in making up what I can't hear clearly. Practice makes perfect ~ I should probably get my hearing checked.

I can relate! I am the youngest of my siblings and we are always scrutinized lol.

I'm the oldest of five. I don't remember being that way (although I'm sure I was). Now? We are all the best of friends.

Interesting that you include a self-portrait by famous British painter Joshua Reynolds, who was not deaf.

I have a 20% deficit in my left ear and a 10% deficit in my right ear. When I don't hear someone correctly, my mind will take over and substitute a word for what I thought I heard and sometimes I'll look at Ken and think..."Ok, there's no way he just said that." lol

Becaue of my best friend in life, neurosarcoidosis (what?), I keep hearing this annoying um wind in my head (shhhhhhhhhhhhhhhhhhh( 24/7, so when people are talking to me, I can't always make out what they're saying. Not because I'm deaf but because of that horrible sound.

aww Adam, poor you, kind of cute but not at the time I'm sure!

My father often had some strange pronunciations for words that derived eons ago from dialects in whatever part of England our family had originally come from. For example, he would say "deef" for "deaf" as in: "No need to yell, I'm not DEEF!" But of course he WAS deef and we DID need to yell, lol.

We all had a word or two that we couldn't pronounce right. Anytime my sister tried to give me crap about it I'd tell our big brother. xD

Oh yes, we all say stupid crap. I still do now before I bite my tongue.

there's not a soul on this Earth that hasn't mispronounced words...don't feel bad...there's still words I have a hard time with and you know I am very olden....

Everyone does stuff like that! Your brother was a little harsh. I'm sure his track record was not perfect.