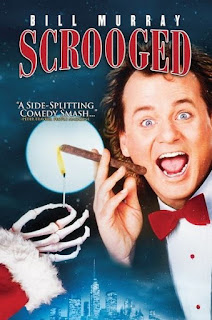 Back when Scrooged came out in 1988 I was just a few months old so this one was made for another generation. I had heard about it at some point, and I knew Bill Murray was in it. I also knew (because it's plain obvious) that it had to deal with Charles Dickens' A Christmas Carol story. The tale has been done so many times that it's just plain ridiculous. So I guess that's why it took me 28 years to see it as I was just tired of that story. I heard it was good, but I wasn't quite sure how good. Some critics weren't that impressed back in the 1980's including Roger Ebert. Was this a holiday classic or a Christmas embarrassment? 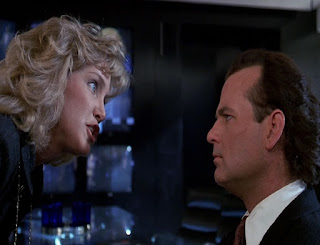 Bill Murray plays Frank Cross, a young president of the TV network. He's mean, crude, and just a plain grinch. He also isn't terribly excited about Christmas which goes many years back. Though his big project of the year is a live TV special based on the story of Ebenezer Scrooge. An incarnation of the story that is suppose to match Frank's personality a little. The almost souless Frank gets irritated at his staff and even fires a guy named Eliot Loudermilk right before Christmas. Bitter and angry, he is visited in his office by his old mentor Lew Hayward. Except Mr. Hayward has been dead for quite some time now. The zombie ghost tells Frank to do what he did not in life. Which was enjoy it and start a family. Frank being Frank, decides to ignore such advice. He is told that he will be visited by three ghosts that night.

The first, The Ghost of Christmas Past takes Frank on a ride to yesteryear. Showing Frank how miserable he was on every Christmas. Frank doesn't take this very well. Nor does he look forward to the next two ghosts. He often thinks he's losing his mind, and requests the aid of his former girlfriend Claire Phillips who is Frank's polar opposite. She is kind and caring, but she hopes to help Frank in his time of distress. However even she can't protect him from the visions of Christmas ghosts. And since Frank is suppose to lead a big TV special, how on Earth is he going to find the time and sanity to get everything all-together? Regardless of if Frank changes a new leaf or not, this is going to be one strange Christmas. 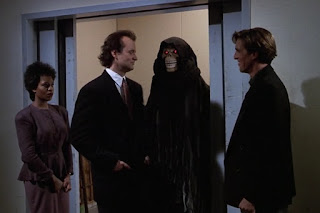 I ended up liking the movie Scrooged just like I knew I would. Bill Murray plays his character well, and the character of Frank Cross is strangely likable despite being a jerk. I really liked his relationship with Claire even though I don't know why she would have ever went on a first date with him to begin with. I really liked the first half but I felt the finale could have been a lot better. Is it a Christmas classic? I'd say it is, to a fair extent. It's not quite Rudolph the Red-Nosed Reindeer, Frosty the Snowman, The Grinch, or even something more modern like Will Ferrel's Elf but I don't think I'd mind seeing it again another Christmas from now.

Of all the (endless, you're right) remakes and adaptations of "A Christmas Carol," this is one of my faves. I think it's a Christmas classic too! It has stood the test of time for almost 30 years now.

Honestly, I just don't like this movie, but my husband insists on watching it every year. I think it's one of his favorite versions. I prefer the more animated versions like the one with Mickey Mouse and the Jim Carey version.

Not one of my favorite holiday movies.