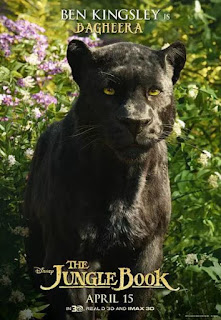 Even though Disney's animated classic The Jungle Book came out in 1967, I remember it being part of my childhood. It's been many years since I've seen it and to be honest I don't remember that much of the story. Like 2015's Cinderella, this one is a live-action remake of another cartoon classic. It came out much earlier this year so I missed it in theaters. I asked my wife Daisy if she wanted to see it with me and she said "I already saw it a long time ago" not realizing this one was new. She was excited to learn the news. I also was shocked to learn there is another The Jungle Book set to come out in 2018 by Warner Brothers. Like most Disney works, they are based on a olden story so there's been works of The Jungle Book before that were not made by Disney. They are all based on The Jungle Book which was made in 1894 by English author Rudyard Kipling. 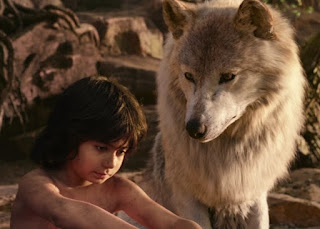 The story is about a "man-cub" named Mowgli. Left in the jungle after the death of his genetic father, the young boy was adopted by a family of wolves. Raksha a wolf mother considers Mowgli to be one of her own. Even if he's not really a wolf but a human. Mowgli is able to speak with the animals and most animals seem to share one language. Life for Mowgli is pretty happy as the wolves love him and most in the jungle respect him to a fair degree. During one year, there is a drought so terrible that there is a declared water-truce. Any animal can drink from the spring without fear of being eaten regardless of where they are on the food chain. All the animals are in relative peace until a tiger hops in to speak his mind. 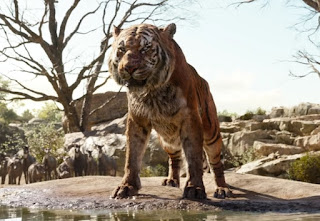 The tiger's name is Shere Khan, and he does not like humans. He smells Mowgli from far-away and demands that he leaves. The other animals remind Shere Khan of the truce and he agrees to stay out of Mowgli's hair...for now. But he reminds everyone that once the drought is over, he'll be having lunch on the man-cub. While the wolf pack theoretically is strong enough to protect him, there will be heavy losses if they decide to defend Mowgli from Shere Khan. The wolves argue and they are very split on what to do. Mowgli decides to flee for the good of the wolf pack. A black panther (who is like a father and mentor to Mowgli) named Bagheera was the one who brought him to the wolves and he feels it's right that he takes Mowgli back to humanity. But will the two make it to a village of people or will surprises lurk in the shadows? 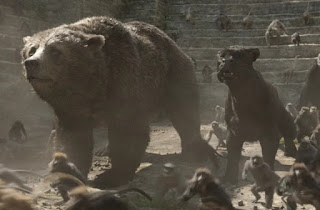 The new Jungle Book is good but not quite as good as I was expecting. One of the reasons why is that even the greatest tiger could not survive a battle against twenty dogs, so it's rather ludicrous to think that a bunch of wolves are almost powerless against one tiger with no allies of his own. So that part kind of keeps me from enjoy the story fully. But it's a good remake of a cartoon that I enjoyed as a child and Daisy liked it too. Though I will say that the upcoming 2018 The Jungle Book will have a good bit of room to improve. I wasn't quite sure if I was going to see it given the space in time but I'm sure I will once it arrives on Blu-ray. I thought Disney did a really good job with the new Cinderella, so it will be a shame if this one is out-performed by another studio.

We thought this movie was great, especially the kid who played Mowgli.

Sounds great, I wanted to see this one, but forgot.

Thanks for you mention

You are probably my kids' age then, I remember watching it with them when they were young. : )

I really liked this version.

We watched this not too long ago and my husband and I both really liked it.