Things I Hate: The Reputation of The Media 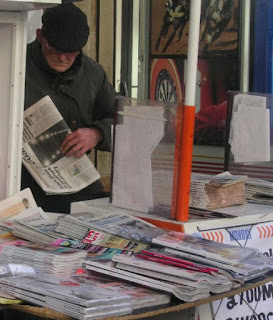 Most Republicans will most likely agree that "The Media" is too liberal and never tells the truth. There is no "The Media" there's more information outlets out there that not even a large group of folks could control it all in the age of the internet. Most of the same Republicans would also say they love Fox News which is one of the most watched news channels out there even though it is "The Media". Along with other right-wing media outlets, there's not a whole lot of room for unbiased stories, fair opinions, or fact-checking. While there are left-wing places that do a similar thing, main-stream "unbiased" places don't usually rely on "commentators" who will say anything they can because commenting is not technically journalism.

This delusional thinking is one of the most disturbing things about American politics. When Americans can't tell fact from fiction because some idiot made up something to get people worked up, we do have a problem. Outside of politics, almost all of those in American journalism care about one thing and that's getting people interested. Scary political news, celebrity gossip, and many more stories that should not matter. And we just eat it up like sheep. Yes "The Media" has an issue but it's not what we think. We are often the problem.
Posted by Adam at 12:00 PM

Email ThisBlogThis!Share to TwitterShare to FacebookShare to Pinterest
Labels: politics, things I hate

You know what...I don't even watch much news anymore. If I see a story on fb or Twitter or Ken tells me something he heard and I want to know the truth, I try searching it online. But even then we don't know if the news sites are just passing along the same story without fact to make sure it's true.

Then there is this internet 'fake news' I am hearing about.

True, Adam.
Centre of the line papers/TV coverage is hard to find, but as for the gossip salacious sensationalists of the Twitter and Facebook fraternity, to be avoided at all times.
Just look at Trump for evidence.
Colin

Some media takes a bad rap. Other media outright repeats the lies. Politicians go ballistic when the media won't repeat their lies.

Back in the day we listened to "Uncle Walter" (Walter Cronkite) who was so revered that we never questioned what he reported. I miss those days.

There is a lot of false news out there and a lot of people making up stories. That's typical. But people shouldn't just take something at face value just because someone said so. They should take it with a grain of salt and verify the story.

There's so many lies (and right to our faces) out there, it makes me sick.
We've tried to watch less NEWS and more FAMILY FEUD to keep our blood pressure down. :)