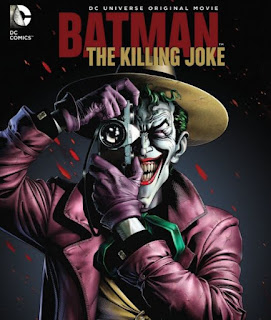 Batman: The Killing Joke is based on the graphic novel comic of the same name from 1988. It's been almost 30 years since the comic impacted the world of Batman. Some one-story bits are non-canon but there is a moment that changed one character almost permanently in the future of Batman fiction. It was quite legendary with how well Batman fans liked the story which was written by Alan Moore who also wrote V for Vendetta and The Watchmen. Unlike some of Alan Moore's works, this was made into a animated cartoon as DC often does a lot of them like it. Did this graphic novel masterpiece translate well here? 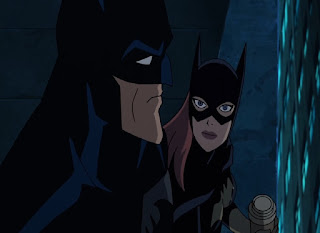 The film originally begins with Batgirl who is actually Police Commissioner Jim Gordon's daughter Barbara. She is some-what experienced but not quite as fearsome as her mentor Batman. She gets the attention of a mob-boss named Paris Franz who mocks and taunts her while "admiring" her beauty. Batman is highly critical of his protege Batgirl as she easily falls into traps because she lets her emotions cloud her judgement. She feels (rightly) inferior and debates Bruce Wayne on many things. Their relationship will be put to the test. Especially as a dark shadow looms on Gotham City and it won't be good. 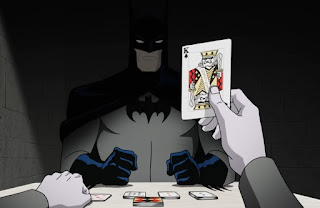 The dark shadow is the return of The Joker. Batman visits him at Arkham Asylum but finds out this Joker is a fake. The real clown criminal is loose in Gotham. Joker is obsessed with trying to argue that the world is just like him. Any fool can turn insane after just one bad day. So he goes outs and plots while Batman tries to find him. But Joker intends on making someone have a "bad day" but can Batman stop him before it happens? Or will the clown prince of crime have the last laugh on the Dark Knight of Gotham? 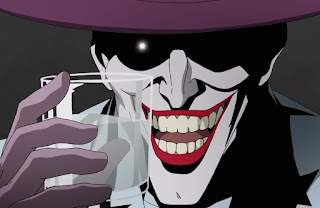 This movie actually did pretty bad with critics and fans alike. I don't think that the Barbara/Batgirl prologue was in the main story in the comic and it's rather meh here. The Joker story is good but feels rather diluted. I blame the animation style for one. The comic was dark and gritty, and while it does a good job at getting those iconic moments down, most of the film is animated like it was a Saturday morning cartoon. The Killing Joke even watered down was never a story for children anyway. Without the serious tone from the comic, the animated movie feels like a can of soda left open for hours. The original was good, but now it feels rather flat. Granted I will say that I liked it more than most, but it's a shame they screwed up such a beloved story.

No need to comment here, I have not watched it.

I found it rather lame, one of the worst animated ones they put out.

That's a good one, thanks for sharing and greetings!

I've been avoiding Batman movies of any kind. It's going to take me a while to get past the Aurora theatre shootings at a Batman movie in my hometown.