Fact of the Day: Armenian Holocaust 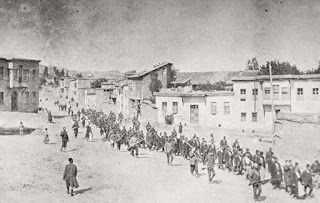 From 1915-1923 The Ottoman Empire (and its successor state Turkey) systematically committed genocide against the Armenian people causing about 1.5 million deaths when it was over. Turkey today still heavily denies that this was genocide but 29 countries officially disagree which includes Canada and a good chunk of Europe.
Posted by Adam at 12:00 AM

Email ThisBlogThis!Share to TwitterShare to FacebookShare to Pinterest
Labels: fact of the day, politics, turkey

Not sure how they can deny that what so ever.

My brain will never understand how humans can kill other humans like this.

The bloodbath we read in history books is just horrific, even more so because we still see it now:(

The civilized world accepts this as a sad reality.

In too many places and times, genocide was thought to be the solution to a problem. When will we learn?