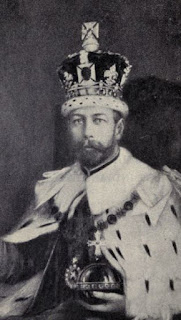 Like some English/British monarchs before him, George V did not approve of his eldest son. but he was fond of his 2nd eldest son Albert and his grand-daughter Elizabeth. He said that he hoped that his eldest son would never have heirs of his own, and that he would ruin himself within a year leaving the throne open to Albert and Elizabeth. That's actually what happened as Edward VIII ruled for only a year, and Albert ruled as George VI. After George VI's death, Elizabeth currently rules as Elizabeth II.
Posted by Adam at 12:00 AM

Wow. So much drama and anger in these families.

a sad story, and such an unkind human being. drama and anger, those are the 2 perfect words!!!

Sure have plenty of family drama over a fancy chair

You snookered me, Adam. I was scratching my head reading about these monarchs, totally missing that our current Elizabeth was the granddaughter! Duh! I must be tired.