Fact of the Day: Greek Egypt 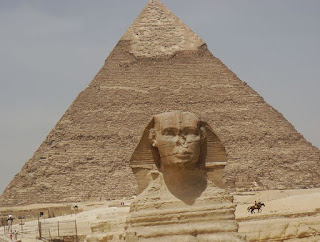 Ptolemy I Soter was a major general under Alexander The Great, and he ruled as Pharaoh of Egypt after Alexander's death. He established the Ptolemaic Dynasty while was mostly Greek genetically blended with the culture of Egypt. The dynasty lasted for three centuries until the fall of Cleopatra and her son Caesarion.
Posted by Adam at 9:10 AM

Email ThisBlogThis!Share to TwitterShare to FacebookShare to Pinterest
Labels: egypt, fact of the day, greece

When I was a kid I loved to learn something new about Egypt centeries ago so much.

Wow, sure had a good run before it fell

I love Egypt so much! They have a very, very interesting history! :)

Ya know I think that might be the first time I've heard about Cleopatra's son or found out what his name was. Interesting.

I also used to be fascinated with Egypt as a child!

Weren't they actually Macedonian, not Greek?

Oh, so THAT'S where Greek Egypt came from!

Oh, I didn't know all this!

Alexander the Great was Macedonian, but then at that time Macedonia was really the power of the time and the Greeks came under Macedonian rule. However Plotemy I Soter may have been a Greek Maj.General in the armies of Alexander.
Ancient History had too many unpronounceable words for me
to remember when I was in College so I stuck to the history from Napoleon to the then (1960) present.
Colin

I remember being surprised when I first discovered that Egypt wasn't always exactly "Egyptian."

The ancient civilizations of the world are endlessly fascinating in the varieties of their cultures and histories. I so want to see the Sphinx!