Fact of the Day: Marc Antony and the Emperors 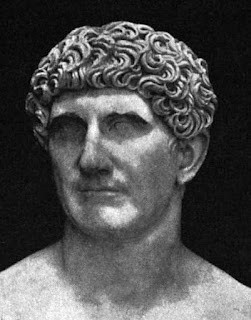 Marc Antony while never Emperor himself played a vital role in the last years of the Roman Republic before it became the Roman Empire. He married Augustus Caesar's (Octavian) sister Octavia to prevent another civil war but this only delayed the inevitable. His forces were defeated by Octavian and he soon committed suicide. Ironically he is the ancestor of the Roman Emperors Caligula, Claudius, and Nero because he did father children with Octavia and their descendants eventually got control of Rome.
Posted by Adam at 12:00 AM

Email ThisBlogThis!Share to TwitterShare to FacebookShare to Pinterest
Labels: fact of the day, Italy, politics, Rome

Took a long while but his descendants won out

Thanks for congratulations, I hope you have a great time too!

His hair looks like spaghetti out of a tin.

After a great start, he ended up on the losing end of things after the naval battle at Actium.

History is so fascinating.

I echo what Martha said. History is fascinating, and the history of Rome and Italy even more so!