Fact of the Day: Tragedy in Nepal 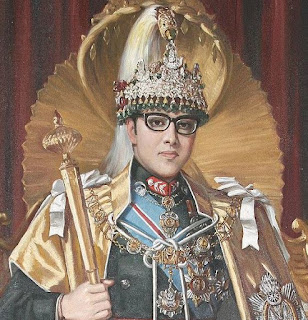 King Birendra of Nepal was murdered along with his wife and other family members by his own son in 2001. The reason was because the prince was denied his choice of bride and he was also apparently under the influence. He turned the gun on himself afterwards but went into a coma. He was ironically proclaimed as King Dipendra but his reign didn't last long as he died a few days later.
Posted by Adam at 12:00 AM

Email ThisBlogThis!Share to TwitterShare to FacebookShare to Pinterest
Labels: fact of the day, nepal

Oh, my! What a tragedy! I had no idea. Thank you for stopping by my blog, and leaving me a kind comment. My condolences concerning your father.

Family violence can touch ANY family.

This was big news at the time.

Such a tragic event:( Almost something out of GoT.

There is a lot more to this story/drama in Nepal than is written above.
Google Nepal and you will get all the details.

I might add that the USA was not one of the countries who sent any form of aid to Nepal in its most recent earthquake disaster. I wonder why - no OIL is Nepal??? and I'd be astounded if Trump and his highly questionable Billionaires Cabinet Secretaries would have a clue where Nepal is located.
Colin

Tragedies play out like this too often. It's always such a sad waste.