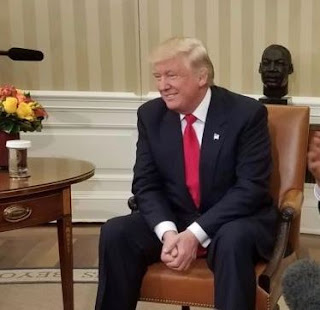 "I love the poorly educated."

I like this quote because Trump accidentally said something that was true about his fan-base. He used this line during the Republican primary in Nevada after saying he had won with the highly educated and the poorly educated. He only apparently "loved" one enough to give them a shout-out. In the general election Donald Trump did far better than Hillary Clinton with voters with a high school diploma or less. Bachelor degree holders on up strongly supported Clinton over him. Now I'm not saying everyone who voted for Trump is "poorly educated" but he is the hero among the trailer parks.
Posted by Adam at 12:00 PM

Those people without higher education were easily duped by Trump and now they are going to pay the price.

I still can't believe he won, for me he's still just tv personality and businessman.

I wish he would "Twitter" himself and his loonies off to another planet.
The world stands in AWE.
The word "awesome" can certainly be applied to this creature and his family and supporters.
Colin

He has said a lot of 'interesting' things.

it is just so painful to listen to him.

I'm not sure when and where RESPECT got lost....I sure didn't like Obama and I am sure not a Democrat but I respect the office of the United States President...and I would never call Mr. Obama names. I am appalled at GROWN PEOPLE being so disrespectful to our Pres.-Elect, whether they like him or not....

Dictators always go after the educated. :(