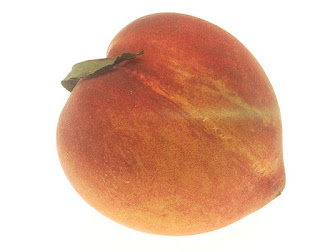 During Christmas Eve we did a trivia game to tie-in to our Christmas gift game. One of the question I had was What State Produces the Most Peaches? as I remember someone coming up with it at work and the "correct answer" was wrong.

One team was my brother Steven, Brandon, and Brandon's wife Terry. They talked and Terry said it was California. Both of my brothers told her it was wrong. Brandon raised his hand so darn confident. He said "Georgia!" and was...incorrect.

Another team had my brother Zach on it and he was confident too. He said South Carolina and he was wrong as well. The nearby Gaffney, South Carolina is so famous with peaches that the water tower is  painted and shaped like a peach.  It was a fair guess. The last team guessed Florida and still no luck there.

The answer was California and it actually ranks #1 by far with South Carolina as #2 and Georgia as #3. The funny thing was Terry was right after being told she was wrong by her own teammates. Got to love the irony.
Posted by Adam at 11:00 AM

I love peaches. But peach flavored things tend to taste like soap to me.

I would have guessed Georgia too. But kudos to Terry -- I hope she gloated long and hard over those know-it-alls who insisted she was wrong!

Yum! I love peaches, they are so good!

I would have said Georgia because it says the Peach State on it's license plates. : )

I'd also have guessed wrong.

California makes sense, given that it's the biggest agricultural producer in the US. If Terry was annoyed at her teammates for getting it wrong when she was correct, I can relate to that!

I would have thought of Georgia Peach and guessed wrong, too

LOL- I would have guessed Georgia, too, and I have seen that giant peach water tower when traveling. Hugs to you and Daisy- Diana

I would've guess Georgia too