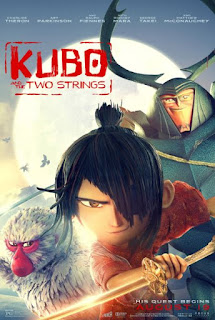 I remember seeing the trailer for Kubo and the Two Strings sometime last year or the year before. It looked really promising but I didn't want to see it bad enough to go to the theaters to see it. I also try to like any film that's set in Japan even though I don't think it ever technically says it does by the characters themselves. This one is not made by a Japanese studio but an American one. It's done by Laika, the same folks behind the awesome movie Coraline and a few others. Kubo did really well with critics but didn't make a big splash at the box office. Was it one of the best animated films of 2016? 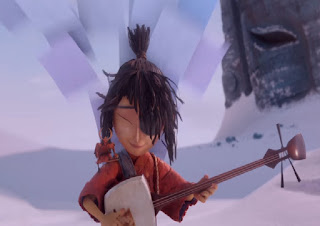 The story's hero is a young boy named Kubo. He lives with his mother Sariatu, and his mama is very sickly and stays in a cave most of the time. Kubo often goes down to the village and tells story. He uses magic to move origami art around to do so. His mother tells him that he should not be out during the night. His mother was the daughter of Raiden the Moon King and she "betrayed" her father by falling in love with a samurai named Hanzo. Kubo's father is apparently dead, and his magical grandfather and evil aunts stole one of his eyes when he was an infant. Kubo loses the track of the time and is out in the open at night. 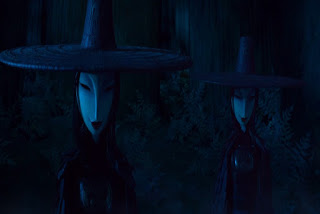 His aunts appear and try to take Kubo's other eye and try to return him to his grandfather Raiden. His mother comes to save him, however she does not survive. Kubo wakes up far away in a snowy area. He is befriended by a monkey that was brought to life by his mother's magic. Along the way they come across a cursed samurai named Beetle who is now part-bug but doesn't remember a thing about his former life. Kubo's mother told him he should find the magic armor his father once searched for. It's the only thing that can protect him from the dark magic of his maternal family. But will they find all three pieces in time? 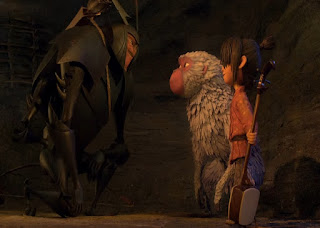 Kubo and the Two Strings is a really good movie but a tad disappointing. I thought the plot could have been better as there is a lot of moments that are badly explained and some of the things they do in the movie is pointless. I thought Monkey was a great protector of Kubo and Beetle was pretty darn funny. I would say it's not quite as good as Coraline but the story is certainly much different from Caroline's anyway. While Laika is not the most famous animated movie maker they have a good record so far.

I want to see this movie!

Sounds fascinating. Don't you hate it when the plot falls short of expectations.

I really should watch this! I haven't heard about this yet actually!

I have really missed visiting your blog, but I'm so mired in my projects right now. Sigh. I was wondering about this movie. I'm going to see if we can watch it on video. Thank you for this review.