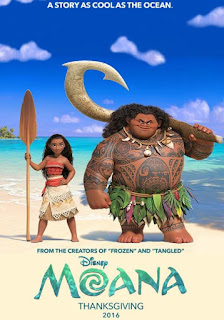 Moana is one of the newest Disney Animated Movies. I had for some reason thought this was done by Pixar but this one is from the studio behind Big Hero 6 and Frozen. Moana is almost like "Unfrozen" since it's set in such a tropical setting. I also heard it was set in Hawaii, but it's more like Polynesia not just Hawaii. I don't think they ever really say exactly where the main island is suppose to be whether it's Hawaii, New Zealand, or wherever. Now this studio actually has done a better job than even Pixar in the last decade. But is this the one that breaks the trend or does it continue the gold standard? 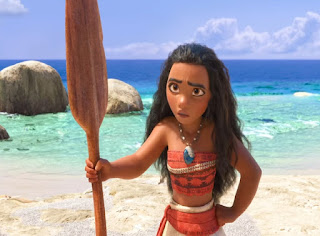 The film's hero is a girl named Moana Waialiki. Her father Tui is the village chieftain of the island they call Motunui and he hopes she will take his role one day as the island's leader. However her father Tui has declared that nobody should travel outside of their island. But Moana really itches to get see what's beyond their small spot in the world. Over the years she was just firmly told that she couldn't leave but as she grows up she starts to test her father's patience. Her grandmother tells her that 1,000 year ago a demi-god named Maui stole the heart of the goddess Te Fiti who essentially created the world. When that happened, a darkness spread across the ocean. Now so many years later, it's destroying everything left and it finally starts to hit Moana's island. Her grandmother convinces her to travel as she was chosen by the ocean itself to save the world. 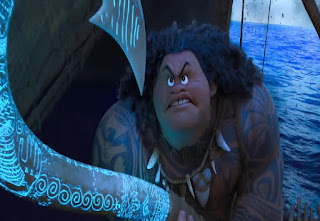 When Maui took the heart, he was faced by the lava-demon Te Ka. With such a massive power, he is easily defeated. He loses his magical weapon and gets stuck on a island. The ocean guides Moana to him, but when she sees the demi-god she is shocked. He is rude, crude, and self-obsessed. He tries to imprison her on the island, but she uses her own skills to escape. He tries to flee with her boat but the ocean itself helps her back and forces Maui to team-up with her. The ocean delivered the heart of the goddess, but the difficult part will be getting it back. Many dark creatures seek it, and Te Ka itself guards the place where they're suppose to reunite the heart with the goddess. Will they be able to survive and save the world? 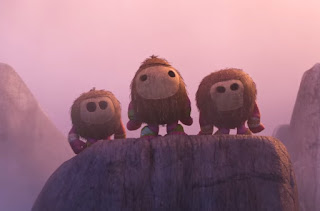 I had heard good things about Moana and I was honestly expecting it not to live quite up to the hype, but it actually surpassed it. Moana is such a well-written character and Maui as well. I also liked the dumb-as-rocks chicken Heihei. Like Frozen, they're big on songs and like Frozen their actually really darn good too. But I don't expect the amazing How Far I'll Go to be played to death like Frozen's Let it Go song though. While it did good for Disney at the box office, I think a lot of folks over-looked it. I almost didn't see it in theaters in favor of Star Wars: Rogue One but this is the much better film by far to me.

My Rare One and I loved it too! The animation was SO outstanding! Great story as well.

Interesting review. When I saw trailers for this I wondered what Oceanic people thought about this depiction of one of their gods.

I saw the 3D trailer and wanted to watch it from then on!

I'm really excited to watch this film and I think I'll go see it next week! :)

I have not seen it. Waiting to watch it with the grandgirls. xo Diana

Took my girls last week and we all loved it too!

I agree 100%! We loved it and it's not because we're from Hawaii either. I especially liked the fact that Moana didn't need a 'prince' to rescue her.