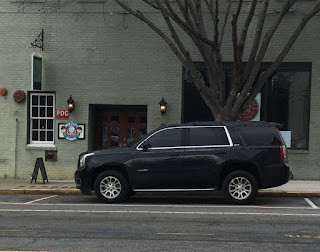 Downtown Deli & Donuts is a new place in our city's downtown in Spartanburg, South Carolina. I heard it was near out library so we walked around to find it. We almost missed it as it's just one of several places in this building. On the opposite side is Hub City Scoops which is the newest ice cream place that opened last year. 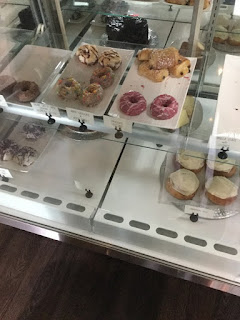 The place is tiny and it was also busy that day so it felt like being in a sardine can. The place is more deli and was rather disspaointed by their donut selection. They were all unique but I didn't see one I liked. 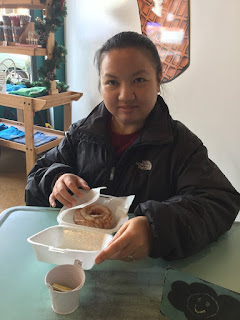 Daisy got one that was like apple cinnamon or something like. We walked down to Hub City Scoops and I got ice cream instead of a donut. 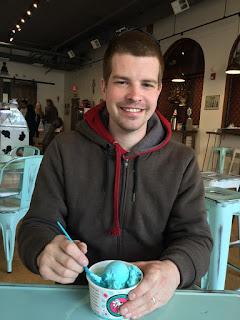 This is a flavor called Blue Moon I think. I'm fairly certain I had it the last time we went in July of 2016. It's quite excellent. 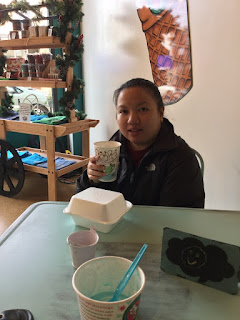 I got Daisy a hot chocolate from there as we sat at the tables.
Posted by Adam at 4:00 PM

You guys always seem to know the best places for tasty treats.

fun treats were had!

This looks like such fun. By coincidence I was just at a new bakery at our mall today. We're going to try the pastries for dessert tonight.

We don't have eating places quite like you have..enjoy

One can't go wrong with donuts and ice cream...it is known.

Our doughnut shop is always crowded too, but they do have the best doughnuts so it's worth the cramped confines.

i've been drinking a lot of hot chocolate...and I LUV donuts...