Question: What Did You Think Of Michelle Obama? 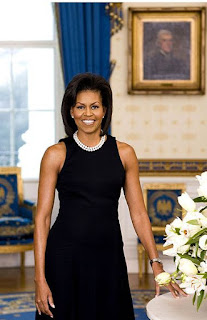 Now that she is currently a former First Lady, we can reflect better upon her. It's hard to be critical on First Ladies as their roles aren't really crucial and it's rather sexist that we make them some kind of glorified mansion hostess. Most First Ladies have a few projects, the one that comes to my mind was her involvement in making school lunches healthier. While any kid can bring a bagged lunch as an alternative, it really ticked off the hillbillies here. Funny how healthier eating didn't go so well in a country synonymous with obesity and fat people who rely on motor scooters because walking is too much effort. 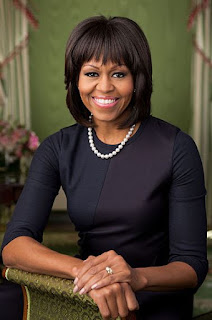 But I was really appalled by those who resorted to racist jokes like putting her in pictures as an ape or monkey. And some right wingers actually claim she was born a man. She gave birth to two children, I know Republicans don't really understand how biology and basic science works but I don't think that theory holds up. Michelle Obama was a great First Lady. She was a devoted wife and a wonderful mother for her children. Like almost all her predecessors before her, she was a fantastic role model.

What did you think of our now former First Lady?
Posted by Adam at 12:00 PM

She always struck me as intelligent, classy and sincere. I always feel sorry for anyone who gets stuck with the sexist and thankless role of First Lady. It's such a restrictive box in which to live. Yes, I even feel bad for Melania.

A beautiful, elegant and intelligent woman.

I'm not very good in all these politic things, but I watched some of her speeches and interviews and she as her husband seems super funny, kind and just like a good person.
Once many years ago I was talking with a russian woman, and I said that I like Obama and she was very angry at me and said that he's a very bad president and I was like maybe, but he looks like a good person.

She was terrific, a loving spouse, a great mother from what I could see and an inspirational first lady capable of being a roll model for young women. She will be sorely missed by all rational people.

I thought that she seemed very intelligent and nice. Though I did think the healthy school lunch program was a flop. I saw firsthand what schools were giving to kids and the kids hated most of it so much that they were throwing much of it away. I don't think I would have eaten some of it either, it looked awful.

Michele was a class act. A truly inspiring woman for others
to follow.
Colin

I'm going to have to disagree with you on the school lunches and her positive impact on them, but I'll let it slide since you are not a parent yet and have probably not been to your local schools to see what is served for yourself. I am a mother, I have been in the school, and I have seen these lunches served first hand, and say she did not improve on the quality in the least. I live in a poor district where most children qualify for free lunches, so we all get free lunch. Free or not, my girls will pack a nutritious lunch from home instead of eating that slop that I am sure Michelle would never serve her own children.

I've always thought of her as an intelligent, classy and inspirational woman. She handled herself very well despite all the racist abuse. And all the sexist nonsense, which all the first ladies have to deal with.

She started off on the wrong foot with me when, after BHO was elected president and she said, "for the first time, I am proud to be an American"....come on folks...give me a break...
and then, when a Republican was voted President and she said,
"well, I have no hope"...She was NOT a great First Lady...I am sure she is a good wife and mother...but in my opinion, she isn't a good American. and that's all I'm gonna say about THAT.

I have admired Michelle Obama from Day #1. She has withstood such disrespect from the right wing and so many derogatory remarks from those uninformed. And yet, she did not respond in anger, but with dignity and elegant beauty. She has been a wonderful role model for our country.

I'm cracking up over your observation that Republicans don't understand how biology and basic science work! I can't help it, Adam! LOL I don't want to brush all Republicans with such a black paint, but there are definitely a disturbing bunch who are anti-science (or lie and say they are for political purposes). I was distressed and offended by the racist vitriol directed at such a gracious and accomplished First Lady. Of all the first ladies in my lifetime, Michelle Obama was my favorite! She will be greatly missed by a lot of Americans.

Colin, you are just plain a mean old man

Coming from you, then I take that as a compliment.
Colin