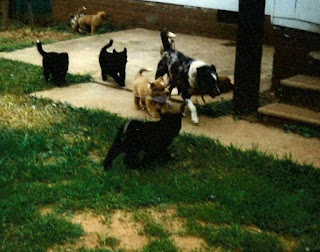 When I was young, we had a dog named Chip. After a year or two we had Trixie. Trixie was a much bigger dog than Chip. I don't ever recall Chip ever being "fixed" but everyone told me that when Trixie had puppies, the father was Rusty who was the dog in the next house over. Our fences weren't exactly the best. I loved having puppies around but in retrospect they shouldn't have been born. Too many unwanted animals around. Have to imagine how many great-something grandchildren Trixie has today. I remember her having two litters. By the last litter, there was just her and one of her sons left as the rest had been adopted by other folks. 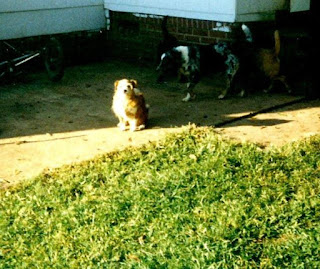 My dog Chip was in the backyard one day and I can only assume he got too close to Trixie's son and that triggered her to attack him and I hear the grown puppy attacked Chip as well. I remember seeing Chip in the backyard with a bloody neck. He recovered and survived actually pretty well. Trixie and her son were put on an animal control truck and I never saw them again. I loved Trixie but I think what happened to Chip diluted the sadness of losing her. I can obviously see why my mother sent her away now, she was afraid we'd be next. And I'm sure old Chip did not want her around anymore either. I kind of wonder if he ever appreciated that. I have to imagine what really happened to Trixie. Did she find a new home? Or was she put to sleep not long afterwards?
Posted by Adam at 11:00 AM

Sometimes it's best not to know....

In this case, ignorance is bliss. I have a hard time handling sad animal stories.

awww, I am pretty sure she was adopted, Adam...