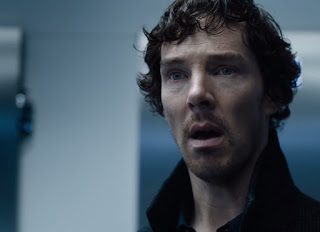 Back in 2014 I started the British TV series Sherlock with Benedict Cumberbatch and Martin Freeman for the first time. The show started in 2010 but it's filmed in the free-time of the actors, so we don't get a season every year. But the last three seasons have been absolutely brilliant and are worth the wait. Luckily they did a one-time special last year that brought the modern characters in  the classic Victorian setting and it was a decent episode to make the wait more bearable.. The 3rd season ended on a really WTF moment, so it was quite interesting to see what the answer to those questions were. 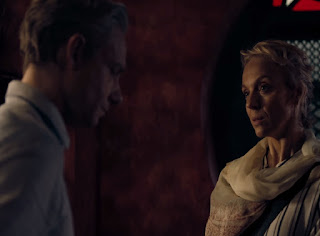 Like the previous seasons, there are only three episodes to Season Four. Sherlock Holmes is unofficially pardoned for murdering Charles Augustus Magnussen after the British government gets a message from Jim Moriarty. The evil mastermind apparently committed suicide on the rooftop after taunting Sherlock back at the end of the second season. Mycroft Holmes believes Sherlock is the best chance they have at solving the mystery as Jim Moriarty was far more powerful than any other person to ever cross paths with Sherlock. But Sherlock's return proves to initially have very little answers. His nemesis doesn't drop by 221B Baker Street for a chat. Sherlock believes he is dead but Moriarty  had planned something special post-mortem. John Watson and his wife Mary are still expecting their child to be born. 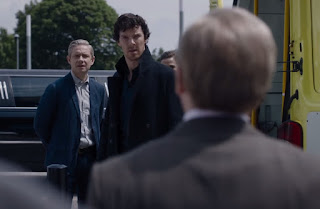 The first case The Six Thatchers has Sherlock taking the scene of a death than spins into something else that is very important regarding one of the major characters. The second case is The Lying Detective where Sherlock investigates against a philanthropist named Culverton Smith. While he is all smiles to the press, Sherlock believes he has more sinister motives. The last case of the season The Final Problem will push Sherlock to his limits and will be something that nobody expects to ever happen. They'll have to be ready as there is an east wind coming. 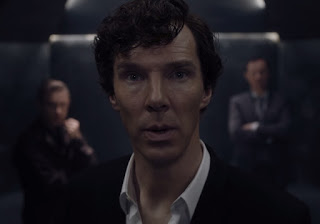 Was this Sherlock's greatest season? I'd say no with confidence but it's still a fantastic one. My wife Daisy and I saw the first two back-to-back and loved them. I thought the twist during the The Lying Detective was arguably the greatest one the series has ever done. While The Final Problem was not what I expected, I don't say I was disappointed. It gets really really intense and the villain was one of the most fascinating antagonists I've seen in awhile. I may have thought this could be the final season but they leave it up in the air. But if this truly is the finale, then they don't really leave on a cliffhanger which is great.

I'm for it, an hour and once every week, can't wait to the next one.

My Rare One and I have the first 3 seasons on DVD. Must get around to watching it soon! We love Benedict Cumberbatch but just don't have enough hours in the day to do everything, alas. Thanks for not writing any spoilers in your review of Season 4.

My wife loves this show.

I haven't see the last episode yet! I'll try to watch it tomorrow. And the death on the first episode...huhuhu

Love it or hate it ... everyone is talking about it!

I'm so behind on so many series I want to see, including this one!

I love this show. Both actors are so fabulous!