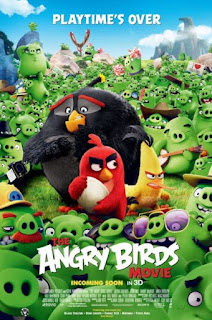 Angry Birds made their first splash on mobile phones (originally iOS) back in the year 2009. It quickly grew into a mad craze that was like the Pokemon of mobile phone games. Everyone was playing it earlier this decade. I think this was mainly because most mobile games are garbage but they made this one fun and the controls worked well. I remember them announcing this movie a few years back and then I kind of forgot about it. The Angry Bird series never had much of a story besides birds vs. green pigs. But was this one a dud or a success as a movie? 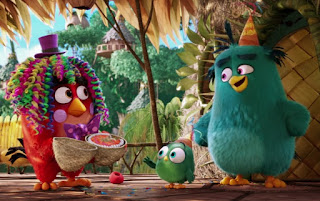 The main "angry bird" is Red who is often out of his luck. He was an orphan, nobody likes him, his job is terrible, and he has quite the anger inside him about it. He screws up being a clown for a "hatchday" party and accidentally becomes the first thing the new baby bird sees. Their child thinks Red is the father which they take him to bird court over. Red is sentenced to anger management classes as his punishment. There he meets other birds with anger issues like Chuck and Terence whom he mostly alienates since he is a natural recluse. But as their classes get started, something strange appears on the island. 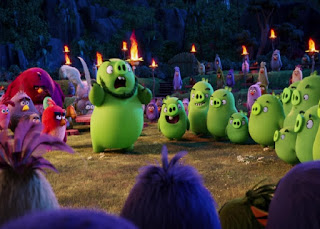 A big ship sails through the waters and lands (due to "bad luck") on Red's home. The angry bird is furious and the leader of the ship is Leonard from Piggy Island. Leonard appears to be just an explorer but when his lies are revealed, Red tries to convince the town there is a lot to mistrust Leonard and his green friends about. The green pigs butter up the town and are extremely popular and they mock Red for trying to sabotage their efforts. Red is absolutely right about the green pigs, but how can he prove it? 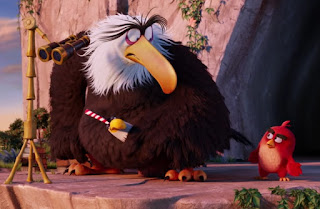 The Angry Birds Movie was actually a little better than I expected. It did really good at theaters but rather average with critics. The story could have been better, but the characters are fairly likable and the humor is decent. Technically this is actually a video game movie, so it's actually rather above par here. So yeah honestly it's pretty darn good considering what they had to work with. But I can only see a sequel being worse, so perhaps they need to keep the angry birds stuck in the realm of video games in the future.

Sorry, but didn't get into Angry Birds.