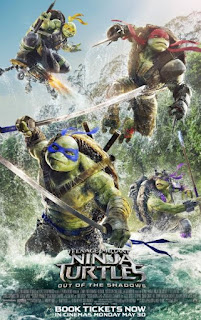 Teenage Mutant Ninja Turtles: Out of the Shadows is a sequel I wasn't really looking forward to. My local library had it on the racks so I decided to give it a try. I thought the "original" reboot back in 2014 was better than I feared but not really that good. While Michael Bay is just the producer (not his typical role of directing) he does like to make movies based on beloved franchises far more goofy and stupid than they need to be. He often works with Megan Fox (who is April O'Neil in the story) and she's often criticized as a "bad actress" but it makes me wonder if that's true or just she accepts roles in terrible movies. She was at least far more attractive than the previous movie April O"Neils Judith Hoag and Paige Turco though the two previous actresses looked far more like the original comic incarnation of the character. Either way, I didn't think it'd be very good. Was I right? 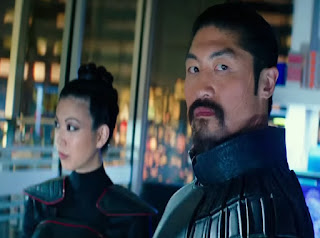 The story takes place a little after the events of the first movie. Oroku Saki (Shredder) is in police custody after being defeated by the Ninja Turtles. Karai and his other loyal foot clan minions break him out of prison with the help of a genius named Dr. Baxter Stockman. However a glitch sends Shredder into another dimension where he meets the alien warlord Krang. They create an alliance to get revenge on the world and the Ninja Turtles. He is sent back to Earth with a strange purple ooze that needs to be tweaked a little by Dr. Baxter Stockman. The ooze can create a unique effect in organic material. 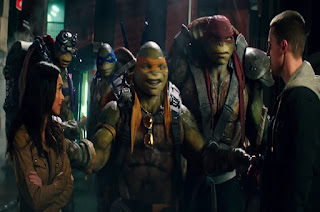 The ooze is used to turn two criminals named Bebop and Rocksteady into mutant animals. The new Rhino and Warthog monsters are used to give the Ninja Turtles the fight of a lifetime. It would have gone better for Shredder's minions if they weren't dumb as a sack of rocks. April O'Neil manages to take the purple ooze from Shredder and escapes. She is saved not by the turtles but by Casey Jones who wears a hockey mask and is quite fearsome with a hockey stick. They team up with Leonardo, Michelangelo, Donatello, and Raphael to save the world yet again. But severely outnumbered, do they have a chance? 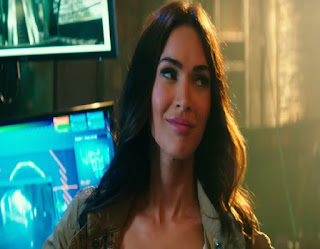 When it came to critical opinion, Out of the Shadows did better than the previous film but still rather mediocre. I thought they did better with Shredder as they humanized him more than the big samurai robot he once was. But everything else was dumb and boring. Krang, Beebop, and Rocksteady are legendary in the comics/cartoons but this movie version was just a big yawn which is rather sad as this was the first major film for all three villains. I also still hate the way the Ninja Turtles look, and Megan Fox isn't gorgeous enough to balance out a weak script. I also didn't care for Stephen Amell who I liked as Arrow's Oliver Queen/Green Arrow. He just didn't look or act much like Casey Jones, but I did think Elias Koteas was perfect as Jones in the original movies from the 1990's. If they make another movie I'd probably watch it out of respect for the franchise but I don't think it'll be any better than the last two.

Never saw the movie....Heck , Ive never even seen the cartoon. However, I have made a lot of crocheted ninga turtle mask for kids.
Lisa

I have't seen it.

You seriously didn't care for this one.

Hi, Adam....sometime when you want to buy something nice for your Daisy, visit that Soma store you mentioned...she will love anything from there.

The whole Ninja Mutant Turtle thing was a head scratcher for me ~ but then I never investigated the phenomenon. I guess I won't start with this movie! D- I get! Have a good one!

Never got into these turtles.

I have never watched that either. I give you credit for giving movies a chance even though you are especially drawn to them.

never a fan of the teenage mutant ninja turtles so i haven't seen this movie yet.

It seems that these turtles have been around for many years, the grandchildren seem to like them!