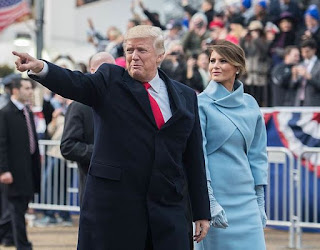 Not long into his new position, Donald Trump has signed quite a few (and notable) executive orders to please his fans that were fed up with executive over-reach going over congress...well when a black guy was president. Most of them are awfully happy with Trump even when he restricted travel from many countries (except the ones that are tied with his business interests) that have a Muslim majority and most likely has ended the acceptance of Syrian refugees. He also said Christians would have top priority in the "vetting process". I'm not a fan of the religion of Islam but playing favorites is unconstitutional and spits on the idea of religious freedom. Besides bad men can just pretend to be Christian. Republicans do it all the time.
Posted by Adam at 10:42 AM

And then a Judge halted implementation of Trump's immigration order. I don't know what's going to happen now but I think Trump will have a fight on his hands.

It's only been a week:'( I feel sorry for the US, and those who voted for him are responsible for whatever is to come.

People say Trump and his policies are not what America is all about. We shall see....

It's been quite a week.

I wonder when he will "order" the French to take back the Statue of Liberty???????
Then again he might just incorporate it into these walls he wants to build.
Funny about JFK and Ron Reagan telling the Russians and East Germans to tear down a certain wall. Maybe Trump's history doesn't go back that far.
Then again I'd be surprised if he has ever taken a history lesson in his life.
Doesn't he know that ALL the people of the USA except the forgotten and what appears unwanted Native Indians are ALL IMMIGRANTS, including his 3rd wife!!!!!
What a laughing stock the USA has been branded with.
Colin ( the newly branded "MEAN OLD MAN" - who studied history).

Loved that last line (and several more spot on observations of your)! I'm holding my breath to see what is going to happen next. The immigration executive order was poorly conceived and implemented, and it doesn't fit any definition of America that I love and respect.

What a perfect post! Love it! And wouldn't you know I just posted about this very thing today.

See ya around, Adam