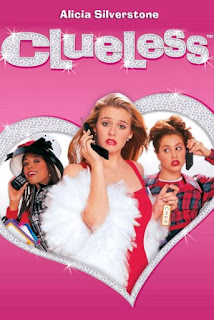 Since I was just a kid in 1995, I probably didn't hear about Clueless until a few years later. For many years I had assumed the movie was just one "for girls" as if someone was trying to create a Barbie movie or something along the lines of that. But it was pretty well received critically and became a cult classic that has a loyal fanbase. It's actually based on Jane Austen's novel Emma and has pretty sharp (and dark) humor. Most of its main stars I remember from works that typically came after that like Brittany Murphy and Paul Rudd. What brought the memory up was Stacey Dash whom I never heard of before, but she became a clueless voice for the right-wingers a few years back but people mentioned she was in Clueless. I did know of Alicia Silverstone as she was Batgirl in the horrible Batman and Robin movie. 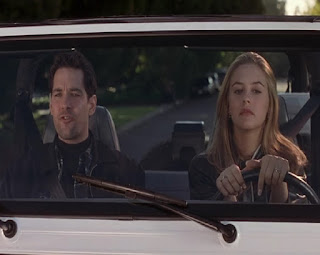 Unlike the novel Emma, the main character's name is actually Cherilyn "Cher" Horowitz. Her father Mel Horowitz is a successful (but gruff as crazy) litigator lawyer. She has a former step-brother named Josh Lucas that still stays in their lives (despite a very recent and short marriage) as her dad still sees him as his "son". Cher is still in high school and doesn't even have a drivers license. So while she often likes to "fight" with Josh, she often has to get on his good side as he is often her only source of transportation. Like most girls her type, she is very "popular" in school but only hangs in a selected group. 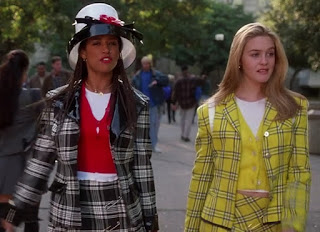 Her best friend is Dionne Davenport and is often just the same as Cher. They have a teacher named Mr. Wendell Hall who is rather grumpy and just gave the whole class bad grades. Despite deserving such grades, Cher decides to use her skills to improve her GPA. She decides to "makeover" a teacher named Ms. Geist and lie to both teachers to get them to date each other. The teachers fall in love and Cher's plan worked. However a new girl at school named Tai Frasier proves to be her next ugly duckling project. She decides to spread "good deeds" and transform her into a beautiful popular girl like herself. But that is easier said than done. 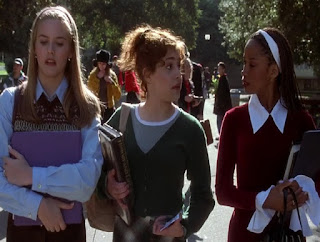 Like I figured (from opinions of others) I did end up liking Clueless. The ending kind of drags on a little, but the whole movie is very smart, funny, and interesting. Now if you told me that someone was modernizing an old Jane Austen novel into a late 20th century California setting I would cringe at the sound of it. But they did a really amazing job taking a classic novel (even if there is a lot of changes) and making it work in a totally different era. I wouldn't call it one of the best movies ever, but even I liked this coming-of-age movie set in high school (I tend to hate them) so that's impressive in my book.

Thanks for the great review. My kids have watched this but I always assumed it was a "Barbie" movie, too. Guess I should watch it now.

I did see this one, didn't care fr it.

Another one I passed on.

I wouldn't mind seeing this film.

I love this movie but the ending (although they're not related) does creep me out.

I loved this one when I was in high school. My daughter went through a phase where it was her favorite movie and would watch it several times a week.