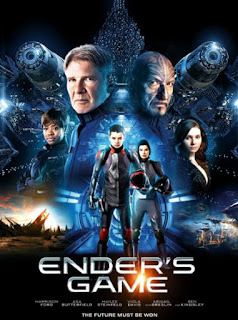 Back in 2013 I largely ignored Ender's Game. While I generally like sci-fi, the whole genre can kind of feel...well generic. It didn't seem that interesting even with Harrison Ford obviously displayed as a major character. Ender's Game is actually based on a book of the same name from 1985. The movie itself didn't do well in theaters, and critics raved about other stuff that year. I later learned that the movie was "boycotted" by those who opposed the book's author Orson Scott Card's extreme right-wing political views. Being very liberal myself, I do think it's rather stupid when conservatives bash liberal entertainers, so I'd be a hypocrite if I did the same. After-all I really like Clint Eastwood's movies and Walker Texas Ranger (Chuck Norris) despite being the opposite side of the political spectrum from those two. Ender's Games should truly be judged on if it's a good movie or not. 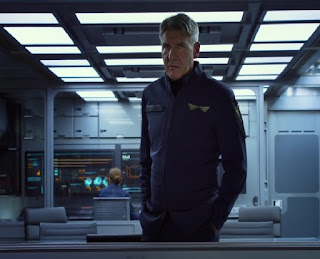 Ender's Game is set in a futuristic world not terribly that many years from the present day. An alien race known as "The Buggers" or more formally The Formics had taken millions of lives on Earth but were defeated by a hero known as Mazer Rackham who sacrificed himself to save humanity. Many years later Earth has trained to stop The Formics when they come back to Earth. The strategy involves taking the smartest kids on Earth and train them at a young age to become military commanders in the future space war. Hyrum Graff is one of the most important leaders for Earth's defense and he sees one hope for humanity. That hope is a young boy named Andrew "Ender" Wiggin. 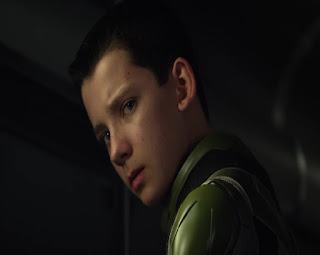 Ender Wiggin's brother and sister were considered for the same role but his brother Peter was considered too vicious and his sister Valentine too gentle. Ender Wiggin was a emotional mixture between the two siblings and the perfect balance of what Earth's needs. He is basically sent up the ranks into battle school where he does well despite having a lot of other cadets hate his guts. One cadet known as Bonzo really has it out for Ender. However the threat alien insects destroying the world could be around the corner. Will Ender Wiggin be strong enough to protect the Earth when the time comes? 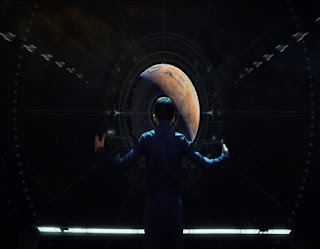 To be honest, I thought Ender's Game was a rather disappointing film. I never read the books on which the movie is based, but what I can tell it seems they had the basic story but only a shell of the greatest of the series remained here. It's very well acted but the story can be confusing and has a few handful of moments that are quite boring. I thought Ender's motivational change at the end was rather odd too, and didn't make much sense to me. But at least Ender's Game the movie wasn't a success at the box office, as they will most likely never make a sequel. Who knew a sci-fi movie with Harrison Ford would be a dud?

I read the book, I don't remember if I even got all the way through it. I hated the premise of using children like that.

I agree with your C+. I know this story is a Sci-Fi classic and fans have been waiting for the movie fore ages, but it just wasn't that compelling.

I like Harrison Ford but I have no desire to see this flick. Glad you can look at this with an unbiased eye. I just think of Jimmy Stewart and Henry Fonda...2 great friends who were polar opposites in their political views. Once they did have an argument only to realize their friendship was more important so they never talked politics.