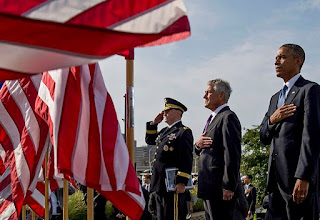 The red, white, and blue on the United States flag had no real meaning when it was created. Mainly because it was based on a previous flag (Grand Union) used for the American colonies. They still have no official meaning but continental leader Charles Thomson gave the colors meaning when creating The Great Seal of the United States. Red was hardiness and valor, white was purity and innocence, and blue meant vigilance, perseverance and justice.
Posted by Adam at 12:00 AM

Vigilance, perseverance and justice are much needed now:(

Did he just pull such things out of a hat? Don't seem to count much now

Never thought about it! Ukrainian flag has yellow and blue colors that symbolize golden fields and blue sky, streams and mountains of Ukraine;)

Those seem pretty fitting, even if they were explained after the fact. Now then, if we could institute all of those things, that'd be great.

Thanks for sharing this.
They are great colours aren't they!

Interesting, yet the British and French flags are also red, whiter and blue.

As Stephen above states - interesting.
However this little comment in one of the Aussie papers today,
may give you cause for thought.

"In 1935,Sinclair Lewis, the American writer, wrote a novel,
'It Can't Happen Here', about the rise of a dictator in America
and how it could happen as it had in Germany."
Seems now it just took a little bit longer.
End of comment.

Think about this dear US friends, one who surrounds himself
with "YES PEOPLE" a la Adolf and Joe in Russia.
Hitler with his Goebbels, "Truer Heinrich Himmler, Bormann, Keitel,
Jodl ( the last two being his military advisors of no use as it turned out fortunately) and a certain Foreign Minister called von
Ribbentrop.
Ah yes interesting times ahead.
Colin

Sounds good to me!