Fact of the Day: Bosnian War 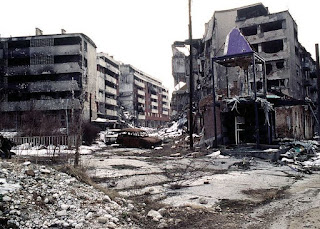 The breakup of the former Socialist Federal Republic of Yugoslavia was not a peaceful one. From 1992-1995 occurred the Bosnian War. Bosnia was a multi-ethnic country with a small majority of people being Bosniaks who were typically Muslim. A considerable minority of people in the country were Serbs who were mostly Orthodox Christian. The Bosnian Serbs created their own army (and the country of Republika Srpska) and fought against the Bosniaks. Due to religious and ethnic differences, Bosnian Serbs committed genocide against the Bosniaks with thousands killed. Most of the dead were men and boys, while women and girls were violated by Bosnian Serb soldiers
Posted by Adam at 12:00 AM

Email ThisBlogThis!Share to TwitterShare to FacebookShare to Pinterest
Labels: fact of the day, politics, Yugoslavia

Disgusting what mankind will do

Yugoslavia was arguably the one country where communism worked. Marshal Tito threatened to kill the families of anyone committing an ethnic crime and there were very few during his time in power.

We have a friend who was an RCMP officer at the time and served with the Canadian Peacekeeping Force in Bosnia.

It was a war of ethnics v's ethnics.
Stephen is correct. Marshall Tito was the stabilising factor
in this genocide prone country of Europe.
Colin