Fact of the Day: Kim Jong-suk 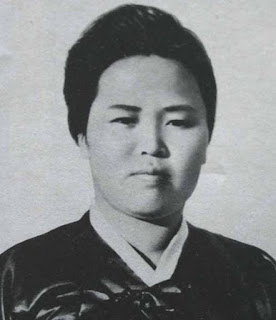 Kim Jong-suk was the wife of North Korean Supreme Leader Kim Il-sung, as well as Kim Jong-il's mother. She died in 1949, and her legacy was made important when her son took over in the 1990's. However her death is rather mysterious as the only "official" word was that she had died from the hardships from her days as a guerrilla fighter. Theories of her actual death include dying from childbirth to a stillborn child, tuberculosis, and murder.
Posted by Adam at 12:00 AM

One will never know for sure with nutso North Korea

There's a lot of strangeness going on in that country. Makes me VERY nervous.

There is so much mystery about that country and everyone who lives there.

....kind of cool that she was a guerilla fighter

Quite a mysterious figure.

I bet ya she was killed off. She may have been too strong and they needed her gone

One will never know how she died, so it is pure speculation.
I presently am more terrified of the antics of Turnip Top
than the little twit in North Korea.
I think Susan Cox has her men confused.
Colin