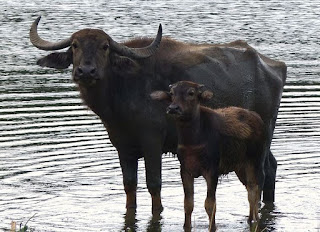 At my wife's work, some school kid wanted to quiz her on some kind of school project. They asked how many stomachs does a water buffalo have. The choices were between one to four stomachs. My wife guessed one. She told me afterwards and I guessed four which I was right. Water buffaloes are practically cows on a evolutionary scale so four (same as cows) was the most likely answer. Their extra stomachs help them digest food that would be normally inedible to other creatures.
Posted by Adam at 12:00 PM

I figured they would have 4 stomachs because they are related to cows.

I wonder if all 4 growl when they are hungry?

I guess we could eat more with 4 stomachs.

Amazing how their stomachs work in order to digest foods normally inedible to other creatures.
I like the picture you've used here.

If I knew this I forgot!

Water buffaloes which were IMPORTED here for the northern regions
for so-called "rice paddy" work......... this did not eventuate
so they were set free and are now a dangerous feral pest.
Be wary of them, they may have 4 stomachs but I believe the two hooked horns are what should be discussed.
Colin

I also would have guessed four.