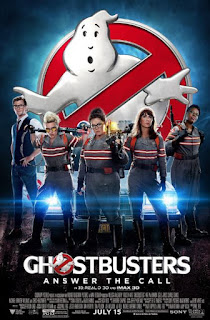 It's been well over thirty years since the original Ghostbusters film and despite the popularity it only got one sequel...until this reboot that is. The main gimmick to the film was that the main cast would be all female this time. I remember a lot of people hating on the movie before it even came out which was pretty misogynistic to be honest. The concept was interesting enough for me, it sounded more original than a remake with guys who could never fill the boots of the original Ghostbusters crew. I knew Kristen Wiig and Melissa McCarthy were in it but I was pleased to see Kate McKinnon (and her SNL co-star Cecily Strong in a smaller role) as I enjoyed her roles (especially politcal impressions) on Saturday Night Live. My wife also didn't realize Thor (Chris Hemsworth) was in the movie until I pointed him out to her. 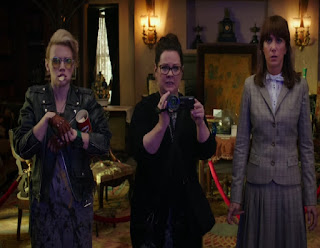 The movie starts off fresh as if the world never had a Ghostbusters squad before literally. The main character is Dr. Erin Gilbert who teaches at Columbia University. She loses her job after her friend Dr. Abigail Yates causes her past-work of "ghost science" known to the staff at the Ivy League school. Since she has nothing better to do, she joins Yates and her colleague Dr. Jillian Holtzmann in paranormal cases. They go to a creepy spot and find a real actual ghost. The blue female specter isn't exactly friendly and gets rather confrontational with the ghost hunters. While most folks would run for the hills the three ladies dig deeper in the world of ghosts. 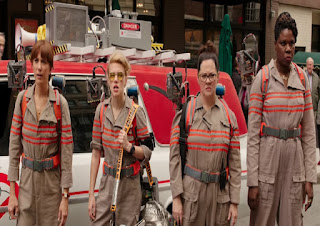 They recruit a soulful subway worker named Patty Tolan and they eventually form what people call The Ghostbusters. They try to help the people of New York City with all the strange ghosts that lurk about. They create technology to hurt and capture such spirits. They also hire Kevin Beckman as their secretary, but he is rather dumb and incompetent.  A mad "scientist" named Rowan North counters their works and seeks to "free" ghosts from the realm of the dead. He's quite good at the dark magic/science so the Ghostbuster girls will have to work together if they hope to save New York City from paranormal demons. 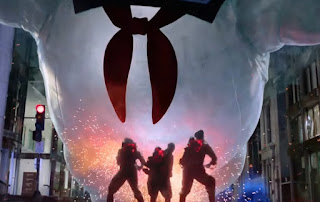 Is the new Ghostbusters the worst sequel ever made? Not really, but it's certainly weak in comparison to the original. The story seems a bit of deja vu but only in basic plot points, most of the best parts of the original get lost in translation. They also seem to rely a lot on special effects that look flashy but they're not very scary. The main characters also lack a lot of chemistry and all seem about the same as a goofy-in-some-way characters. Most of the original cast make cameos which are okay but nothing special. I really tried like the movie but it's not really exciting or funny. The humor is decent but it just comes out so weak. Like Star Wars Episode I: The Phanton Menace, it's not as bad as people say (as many don't like their "childhood" ruined) but it could have been so much better with a better script and direction.

I had forgotten about Ghostbusters until I saw your post. I watched it, and I remember liking it. Thanks for the head up on the new one, I'll be on the lookout for it.

I liked the reboot! But not enough to see it twice.

I just recently watched this and gave it a chance. But to be honest I thought the acting was really lacking and the jokes were so not funny at all. I'm already not a fan of remakes and this didn't help.

I guess I just wasn't interested in returning to this franchise.

I do want to see this but I know it doesn't look that good. It looks like the 2 main gals are trying too hard. From what it sounds like, it sounds like it's better than the sequel but not by much.

I don't seem to have much interest in this one. I saw the trailer and it didn't seem that good.

I have this one on my tivo to watch when I get some free time.