Question: Does Trump's Relationship with Putin Concern You? 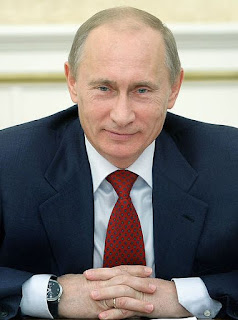 Vladimir Putin has made it a not-so-secret that he really REALLY wanted Donald Trump to be president. It seems lifting economic sanctions and keeping Crimea is more than enough reason for him to want Donald in the Oval Office but it what does Trump get in return? It's hard to say but him not releasing his tax returns does make it oddly suspicious.  Putin is certainly scratching his back and honestly this kind of stuff should be grounds for impeachment though I honestly think Mike Pence would be worse as president.

Does Trump's involvement with Russia concern you?
Posted by Adam at 12:00 PM

I can not BELIEVE you are talking impeachment of our new president. Shame on you, Adam. He IS the pilot of this airplane and if he goes down, so do ALL Americans. It's only fair and our duty to give him a chance. I am finding more and more and more people that must have never heard of THE GOLDEN RULE.

Under normal circumstances I'd agree with bj, but these aren't normal circumstances. Trump is acting like a saber-rattling despot and we all need to be on guard to not follow Germany's example in the 30s. Hitler made wild promises to get elected and then subgegated his own people.

If I were a citizen of the United States of America most likely.

It concerns me a lot. I agree with Mr. Hayes.

Putin laugh must be resounding through the walls of The Kremlin.
Trump is being taken as the idiot he is.
Seems that Trump has mistaken the attitude of one of the USA's best allies - Australia. He pulls out of a deal.......hmmmmmmm!
Seems he is also upsetting the Indonesians which has the world's largest Muslim population.
Who is he going to upset next??????????????????

I'm hoping that Australia may use the jungle training base for the US army and marines as a bargaining point - this base in the Northern Territory just outside of Darwin has US military units training on a rotation basis.
Now if we say NO........ where will the US military get jungle training???????? South America eg: Brazil or Venezuela..... answer no way... he has insulted your Latino neighbours. Indonesia, Thailand or Malaysia....... another no way, Hosa.
Ah yes Sarah Palin of the Tea Party will suggest Alaska. lovely tropical jungles abound up there - ha ha!
Then again does Trump know where Alaska is????

Totally agree with your summation, Adam mate and as for Pence.
God forbid..... a leap from the "Tweeting Frying Pan" into the abyss of stupidity.
Cheers
Colin

his relationship with reality troublws me even more!

I will leave it to my American friends to figure this out. I will say this though: politicians are public servants and if they do something wrong, they should be held accountable.

I am neither American nor Russian, but I remember there were theories about Obama being a Saudi implant. Just to clarify, I am not Saudi too :-)

I think Trump better educate his White House spokesman.
The PM of Australia is called Malcolm Tunrbull - that is as in TURN BULL.
Unfortunately the White House spokesman referred to the "phone call" as a call between the President and Mr. TRUMBULL.
Really..... who next for insulting?
Colin