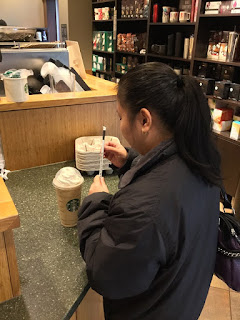 When it comes to the realm of fast-food and other kinds of businesses, most of them are generally very pro-Republican which is understandable as the Republican Party is for low-taxes, almost no regulations, and they don't care for the rights of workers. Starbucks isn't really overly political, but I've seen some conservatives get really mad at the cafes. They got more "hate" again for pledging to hire around ten-thousand Syrian refugees over five years which honestly isn't a huge number given the time span and the fact that there are A LOT of Starbucks. Daisy loves their drinks, and when she wanted some at the Haywood Mall in Greenville, SC I didn't stop her. I'd like to thank Starbucks for helping Syrian refugees. Daisy's parents and grandparents were refugees from the Vietnam War (which also affected Laos) so it would be rather ironic if we didn't have sympathy. The Syrian Civil War is a humanitarian problem and I'd rather we help the millions who'd most likely die if we were to leave them stranded.
Posted by Adam at 5:00 PM

The Vietnamese community here in Australia as a result of the refugees
fleeing after the fall of Saigon have become a vibrant part of the Australian community and have excelled in all spheres of business,
medicine, law, academia and sport etc etc.
I agree with you Adam totally. Refugees are all vetted by the appropriate authorities and few of the no-gooders get through the process.
Cheers
Colin

I'm still thoroughly disgusted with Trump's phone call to Australia's PM and his rudeness. I'm all for Starbucks even though it's pretty expensive.

This is the worst humanitarian and refugee crisis of our time, and I am in full support of helping these people. They are fleeing the same terror that everyone is worried about.

It is exactly the same here in Canada. Helping refugees is a short term investment that leads to long term gain.

They do have a lot to offer.
Agree with you Adam.

I couldn't agree with you more.

I'm hoping our court system can get this ban lifted. It's so wrong not to help.

Thanks Kay.
Having a White House spokesman who gets our PM's name wrong and then refers to Malcolm Turnbull as Presdent TRUMBEL - well one does have to wonder what happens now in that OVAL Office??
Martha above may soon have PM Justin Trudeau referred to as
President Justin ( well I hope they get the christian name correct.. I dread to think how that may be mangled) FALSEDEAU!

Strange no comment from Texas or any Springfield in the USA????? Sore fingers, I suspect.
Colin

I like to get their iced frappes, but only occasionally as a treat.