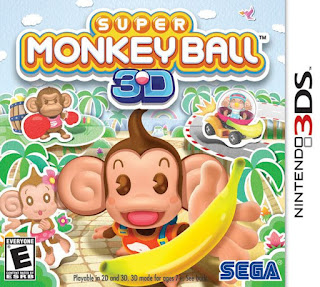 One of my favorite times in video game history was in the early 2000's because I was a big fan of the Nintendo Gamecube. Sega's literal first game on the Nintendo console was Super Monkey Ball. It debuted in arcades, and was probably going to be a title for the Sega Dreamcast. However the Dreamcast had failed by the time so Sega decided to make it a launch title for the Gamecube. I enjoyed both the original game and Super Monkey Ball 2 which was also on Gamecube. The only other one I played was Super Monkey Ball: Banana Blitz on the Nintendo Wii. The problem with that game was that the motion controls (there was no option for an analog stick) made the game even more difficult than usual. It's been quite a few years since I had some time with a Super Monkey Ball game and even though this 3DS game is rather old now it's about time I gave it a chance. 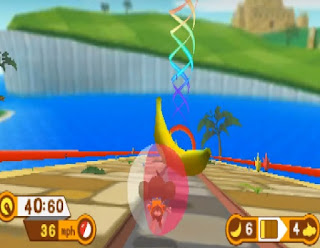 Anyone familiar with the series will know what to expect. You play as either AiAi, Meemee, Baby, or GonGon and tilt the stage (as you can't technically control the ball) to move around and ultimately reach your goal. There are several worlds with a set number of stages each. Since all stages can be done in less than a minute, the single player mode is not very long. It's also a little easier than the ones I remember on the Nintendo Gamecube. The graphics are also pretty low-par considering that the 3DS is actually more powerful than the old Gamecube. But the good thing I remember about the first two games was their awesome mini-games. 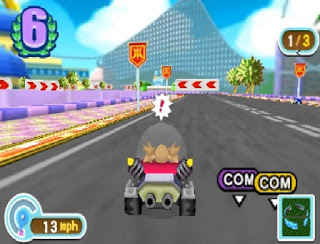 And Super Monkey Ball 3D only has...two. They are Monkey Race and Monkey Fight. Monkey is Race is pretty much a Mario Kart clone which is ironically quite rare these days. You race on very plain tracks and get the chance to use items to slow down your opponents or speed yourself up. Monkey Fight is now a Super Smash Bros. clone (instead of how it used to be in the original games) where you have to pick up bananas to win the game. The best way to get them is to inflict damage unto your opponents as they drop them as they get hurt. 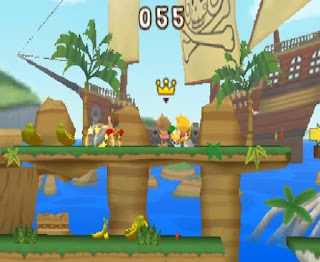 But to be honest these mini-games are horrible. And it's a good thing too because without online game-play (who dropped the ball there?) multiplayer is rather limited so at least there was not much potential fun lost there. The single player levels are okay but they just seem rather unoriginal. I can't tell if I just gotten tired of the series or if the developer got really lazy at making these games. I know the original team (Amusement Vision) have been defunct since 2004 so that's probably the reason. It's hard to believe the 3DS is about five years old but this was one of the first 3DS games and nobody ever talks about it, imagine that. It may be time for Sega to retire Super Monkey Ball forever, but then again Sega hasn't made very good games in a long time.