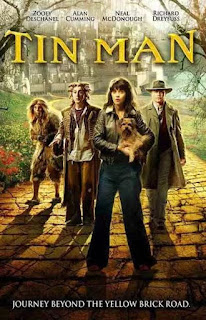 While the 1939 movie The Wizard of Oz is not the only work based on the classic books by L. Frank Baum, it is by far the best. From one of the most classic movies ever made, it's a bit of a shame how other works just didn't hold a candle to it. I actually liked Oz the Great and Powerful quite a bit, but I can't remember any other Oz work I liked besides that. I had been debating on whether I should watch Tin Man which is a mini-series done ten years ago in 2007. I think the main reason I wanted to see it was because of Zooey Deschanel being the main star. Even though I haven't seen much of her work, I do have a mild crush on her. When I started Tin Man I was quite shocked to see how much different this Land of Oz really is. 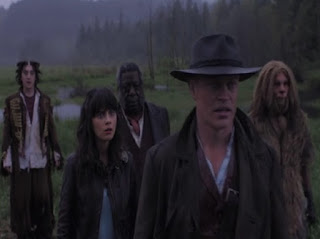 Zooey Deschanel's character is a young woman named DG. She is whisked off to a dystopian land called the O.Z. (which stands for Outer Zone) and finds herself in quite the pickle. She doesn't seem to be very special but she finds out more as she adventures on. She bumps into a man calling himself Glitch who had his brain taken out. While he is friendly and helpful, he certainly is not in one piece mentally. They free a man named Cain from an iron suit meant to be his prison. They also make an ally out of a man-lion named Raw who has the power of reading the hearts of any person. Together they hope to find something before someone evil does. 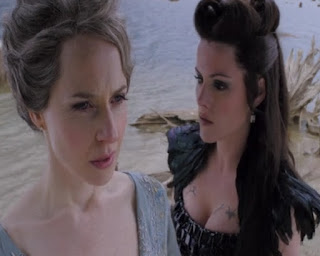 That evil person is Azkadellia who is an extremely powerful sorceress who also is O.Z.'s de-facto Queen. For unknown reasons, she overthrew her mother and imprisoned her in a magical cell. Azkadellia is looking for her Emerald of the Eclipse which has the power to turn the land into complete darkness. She has been rather pathetic on being able to find it, but DG may have the skill to get the magical stone before she does. However when Azkadellia finds out DG's name, she is reminded about a deep dark secret of the past. Will the land of the O.Z. be saved or will DG be safer in Kansas? 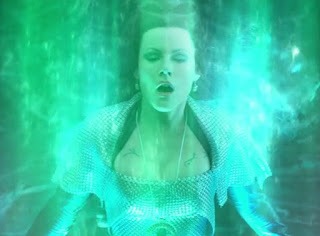 To be honest, I really wanted to like Tin Man but it was done rather stupidly. The concept is unique but the characters are so dramatically different that it's hard to believe this is part of the Wizard of Oz series. Most of the main characters (and their actors) are well-written but the story feels so stretched out when it's done as three episodes that are about as long as a traditional movie trilogy. The first two episodes are a little boring, and while the final one is better it still doesn't make up for the lackluster first two. It's not nearly as bad as it could have been, but it's not really going to appeal to many including Wizard of Oz fans.

I haven't found OZ adventures other than the original movie to be very satisfying.

I have this in my Netflix queue. Haven't gotten around to it yet. I supposed with that rating, that's not a bad thing.