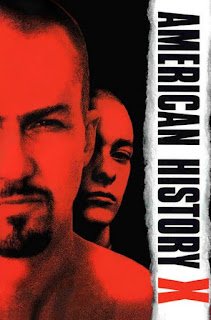 American History X is a movie that came out when I was just ten years old, so I certainly wasn't a member of the target demographic back then. I later saw some of the works of Edward Norton, and he is a very powerful and talented actor. This is one of his earliest roles, and his performance here nominated him for an Oscar for Best Actor. The movie also stars Edward Furlong who most people remember as the young John Connor in Terminator 2: Judgement Day. Not long after this movie, his career took a nosedive due to his substance abuse. Except for Edward Norton's performance, the rest of the movie had no other Oscar nominations, though the movie was generally liked by critics. Has the movie held up after almost twenty years? 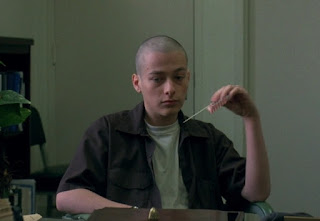 The movie begins with a kid named Danny Vinyard being called into the principals office. His teacher Mr. Murray attempts to get Danny expelled. Danny knew his history teacher was Jewish, but he still turns in a paper written in a positive-light based on Adolf Hitler's Mein Kampf. The African-American principal Dr. Bob Sweeney decides to give Danny a second chance against all logic. He decides to become his de facto history teacher by making a "new class" called American History X. This history class will be far more personal and his first assignment is a new paper. Danny is to write a paper on the life of his older brother Derek. Danny and Derek might have a gap in age, but their lives aren't much different. Derek went to jail not long before for voluntary manslaughter. Derek was a proud neo-nazi in California, and he viciously murders black gang members for trying to break into his vehicle. 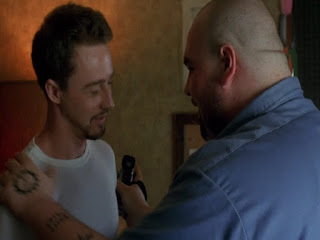 Derek gets out of prison not long after, and he comes home a very different person. His hair is grown back, he is far less angry, and he is far more sympathetic. Derek learns of Danny's troubles in school, and sides with Dr. Bob Sweeney on Danny's new take in school. Derek spun out of control mainly because his racist (but not radical) father was murdered by black gang members. However he became reformed after prison and wants his brother to have a better life. While Derek is sympathetic to his friends that still hold the viewpoints he once had, he makes it clear he's a changed man. Danny however could easily fall into the realm of radical right-wing extremism and hatred. Will the two brothers make it out okay by the end? 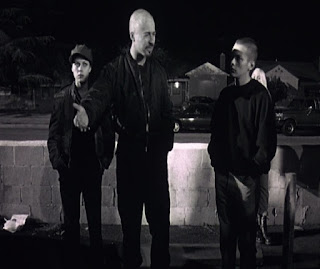 I wouldn't call the movie the greatest (or even Oscar Best Picture worthy) but it's certainly good. Edward Norton's role as both the radical and reformed Derek Vinyard is one of the most memorable roles you'll ever see. While Edward Furlong isn't bad as Danny, he is certainly over-shadowed here by his fictional older brother. The past and present timelines also flow really well together and the past being in black and white is a good artistic touch. What I really didn't like was the ending as it kind of made the plot of the movie feel rather pointless to me.

I remember this film. It´s good for me.
xx

I saw about half an hour of this movie on TV once and thought it looked really good. It's still on my "to see" list and some day I'll get around to seeing the whole thing. Thanks for your review!

Missed this one. It seems I miss a lot of good movies.

The premise of the movie sounds intriguing. If I find it under free movies on our cable service, I'll have to check it out. I always enjoy your thorough reviews, Adam.