Fact of the Day: Anglo-French Wars 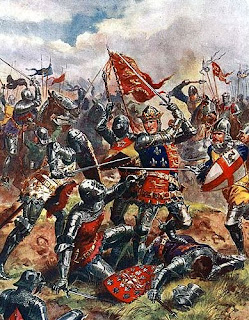 While modern-day allies, France and England had quite a notable string of wars against each other since the days of the monarchies. However there was no wars between France and England until after the reign of William the Conqueror. William was Duke of Normandy which gave him quite a considerable amount of de facto power in France. Through French princesses being ancestors, Kings of England had a strong claim to the French throne (the main being through King Edward III) when direct-male lines to the French throne died out. Their claims to their lands (or throne) in France were the main causes for such wars.
Posted by Adam at 12:00 AM

Gosh! I knew there was a lot of animosity between the English and French, but I didn't exactly know why. Thank you for this.

I didn't know that before.

I always learn something when I read your blog! Makes me feel smart for the day. :)

And I would say they still don't like each other!

Rich sobs ruin it for all

Young William and Kate are over there visiting the French President
to strengthen the "Entente Cordiale" at the Elysee Palace.
They seem to be getting far better on than the utterly bewildered
Angela Merkel who is visiting that madman in the now lunatic asylum
on 1600 Pennsylvania Avenue.
The strange looks on Angela's face at the utterances of Turnip Top deserve an Oscar.
And on our side of the Pacific we have your ill-advised and totally inept Secretary Of State saber rattling in Seoul.
Wake up America before the missiles start flying. Impeach the madman
ASAP.
Colin