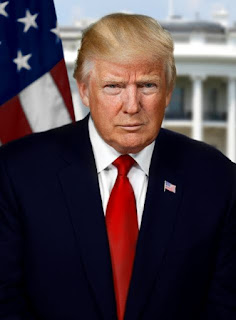 The American President is officially voted in by the electoral college which are made up of individual electors who almost always vote the same way their state's population did in the election. However there have been a few examples of "faithless electors" who vote for the other major candidate or someone else. The 2016 Presidential election had two major party nominees who were very unpopular. Not surprisingly, many faithless electors decided to vote against them. Donald Trump lost two electoral votes both from Texas where one went to Ron Paul and another vote went to John Kaisch. Hillary Clinton lost more than Trump. In Washington state she lost 3 votes that went for Colin Powell, and 1 vote to Native American activist Faith Spotted Eagle. In Hawaii she lost one vote to Bernie Sanders.
Posted by Adam at 12:00 AM

The voting system seems to have flaws, probably the only country in the world that the person who get the most votes still lose the election!

Man...the voting system there is such a confusing one, and I think is kinda whacked....sorry but it's the truth. Now, look what the US ended up with:(

PS My husband just started re-watching some episodes from last season of GoT which made me wanna see the new season even more.....waaaaaaaah!

Isnt good I think, finally would be the people who choose!

It's probably time to get rid of the Electoral College.

You guys have such a loooooooong arse and convoluted process.

I really don't get this Electoral college since this could have so many hands in this pot. If one just went by the most votes Clinton would be in.

Probably ??????
It is a joke.
Yep, Stephen, get rid of this confusing and ridiculous
system.
Then again as the World says....could ONLY happen in the USA!
Colin

It sounds so confusing!