Fact of the Day: Syrian Refugees 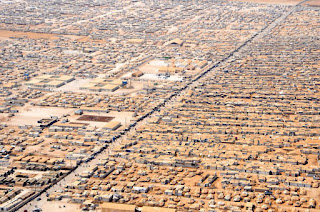 The Syrian Civil War has caused one of the biggest refugee crisis events in history with millions fleeing. Despite intense political debate in the United States and Europe, most refugees are women and children. And most Syrian refugees live in the Middle Eastern region with places like Turkey and Lebanon that have so many refugees (in the millions) that about 10-20% of the country's population are Syrian refugees.
Posted by Adam at 12:00 AM

Email ThisBlogThis!Share to TwitterShare to FacebookShare to Pinterest
Labels: fact of the day, politics, Syria

So bad war, I saw on fb some violence video, it was fearfully

This is a huge crisis!

Awful indeed that all have to flee.

It's always the innocent who suffer in wars, which is why they should only be prosecuted as a last resort.

It is a calamity of proportions unheard of in the history of mankind.
Colin

Here is the No.1 problem - he is the "President" of Syria.
President Bashar al-Assad.
See what his forces have done overnight!
However with Turnip Top and his "tweets" being the highlight of US news, I dare say Bashar al-Assad's war crimes would not rate in the US news.
Oh any more Obama wire tampering been discovered - what a pathetic claim and not a iota of evidence.
Colin

Very concise and shows how horrible it is for these refugees. The innocent are usually the ones who hurt the most

My son was working in DC doing volunteer work for a while to help settle refugees into American life. He says we have allowed very, very few refugees into our country compared to other countries.

The refugee crisis is terribly sad. I keep telling my husband that I would be fleeing too in that situation.