Fact of the Day: Thomas Baker 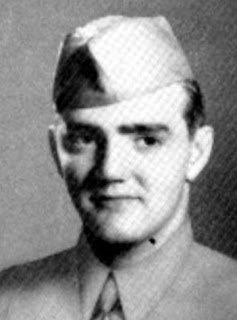 During the Battle of Saipan, Thomas Baker was wounded and refused to be evacuated to give his comrades a better chance of retreating. They put him next to a tree with a pistol that had only eight rounds. When American forces retook the position, they found him dead. However around him were the bodies of eight Japanese soldiers. His was posthumously given the Medal of Honor.
Posted by Adam at 12:00 AM

Here is one more hero that I have not heard about which is a crime. These people need to be talked about in schools and more....not sports people or entertainment people.

He could have shot himself.

Made sure to make every bullet count

He must have been a good shot.
8 bullets and 8 dead Japanese soldiers!!!!!
Remarkable.
On that alone I guess a high award was worthy.

I wonder how many readers know where Saipan is.
I visited the place in 1992 along with Guam after a hurricane
had hit. The damage was unbelievable.
Saipan has quite an interesting Colonial history and is presently
a commonwealth in the Northern Marianas of the USA.
So has representatives in Washington, DC.
I suggest Adam that your readers google - Saipan to improve
their history and geography.
Cheers
Colin

Oh, wow! That is amazing.

Wow! That IS so amazing! What a courageous, self sacrificing hero.