Fact of the Day: Werner Goldberg 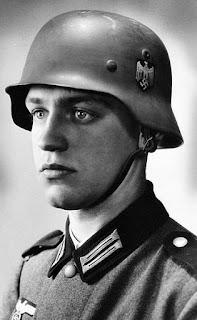 During the early days of World War II, Germany used the picture of Werner Goldberg in propaganda as a picture for the "ideal German soldier". Ironically Goldberg was half-Jewish and was expelled from the military after Hitler issued an order ridding any soldier of any considerable amount of Jewish ancestry. Being half-Jewish wasn't exactly a death sentence during the Holocaust so Goldberg survived and died as an old man in 2004.
Posted by Adam at 12:00 AM

Email ThisBlogThis!Share to TwitterShare to FacebookShare to Pinterest
Labels: fact of the day, germany, politics

I find this, in some ways, poetic justice that Hitler and his evil minions chose someone to represent them and it turns out to be a person whom they dislike. I'm glad this man survived

That came back to bite them

Birgit said it better than I could.

Doesn't look too Nordic to my eyes.
Blonde hair.......anyhow there were quite a few
soldiers in the German Army/Navy/Luftwaffe with some Jewish blood
in their veins. Milch in the Luftwaffe was a Generalfeldmarshall.
Remember that famous comment by Fatty Herman Goering......'I'll
decided who is Jewish and who isn't".
Colin

I am also glad this man survived. What a terrible time that was.

I love irony! And like Martha, I'm glad that he survived!