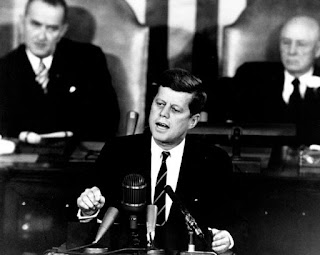 "I believe in an America where the separation of church and state is absolute. Where no Catholic prelate would tell the President (should he be Catholic) how to act, and no Protestant minister would tell his parishioners for whom to vote. Where no church or church school is granted any public funds or political preference and where no man is denied public office merely because his religion differs from the President who might appoint him or the people who might elect him."

JFK may have been a imperfect person, but he there was a reason why he was a very respected president. Anybody with common sense can read human history in the European Middle Ages or a post-pagan Middle East and know for sure that religion and government do not mix well. The separation should be absolute. It pains me to see religious extremists impact laws and try to shove dogma into schools. That's not what America was based on.
Posted by Adam at 12:23 PM

Well done JFK, I agree with him.

A truly great man - with some imperfections but nobody is perfect.

What was so strange with his run for the Presidency against "Tricky Dickie" was that utterly nonsense clap-trap of him having a tunnel built from the White House to the Vatican !!!! What an engineering feat!!!!
The Evangelicals tried every stupid trick in the book for his defeat.
JFK must be spinning in his grave in Arlington National cemetery
with the antics of "Turnip Top".
Colin

America was founded on religious tolerance, a fact that some people conveniently overlook.

Complete separation of church and state. I totally agree with that!

We absolutely agree, of course. It's upsetting that there are Americans who think the U.S. can only be Christian. This is what causes wars, for goodness sake!