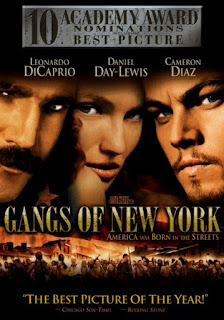 I think the first time I've heard of Gangs of New York was some time last year. Back in 2002, I was just fourteen years old and this movie was certainly not on the radar. The only person I knew of in it back then that I liked was Cameron Diaz. I came to respect Leonardo DiCaprio more as I grew up. I didn't know who he was for a long time, but Daniel-Day Lewis is an amazing actor. Unlike Cameron Diaz and Leonardo DiCaprio, Daniel-Day Lewis can go years without being in a movie. I do respect that he'd rather be in something he believes in that have his reputation tainted by acting in a dud of a movie. The movie was directed by Martin Scorsese who like Daniel-Day Lewis focus more on quality of films than quantity of films. The film went on to be nominated for quite a few Oscars, but brought home no wins even for Daniel-Day Lewis. The movie is based on the non-fiction book of the same name by Herbert Asbury. 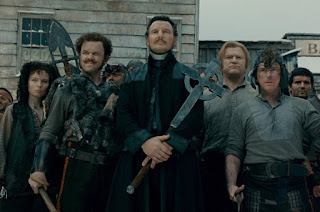 The movie begins in the year 1846 in New York City's Five Points district. Many Irish immigrants have formed together and started a group known as the Dead Rabbits. Led by Priest Vallon they openly challenge a group known as The Natives led by William "Bill" Cutting. The Natives are "American" and Protestant and the Dead Rabbits are Irish and Catholic. The hatred between the two groups leads to an all out (yet orderly) battle which leads to the victory of The Natives after Priest Vallon falls in battle. His young son Amsterdam sees Bill Cutting murder his father with a knife and he is forced to cry as his father's final moments drift by. Soon after Amsterdam is sent away, and Bill Cutting bascially usurps the throne of being the unofficial king for the darker side of New York City and his rule is tyrannical. 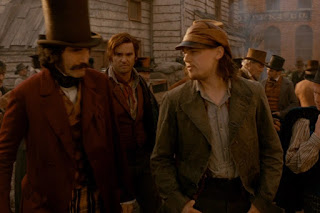 Practically any criminal works for Bill Cutting in one way or another. While Bill Cutting dislikes Irish immigrants, he wasn't keen on extermination but rather being "superior" to them. Many of the former Dead Rabbits fall under his umbrella. Amsterdam eventually grows up and in the year 1862 he seeks his revenge. Luckily Bill Cutting has no idea who he is, but he remembers his father surprisingly fondly even though they were bitter enemies. Amsterdam Vallon isn't stupid and he knows he can't simply assassinate Bill the Butcher and walk away. He ironically finds a spot in his ranks and he's "trusted" to an extent. Will Amsterdam have the courage or even the strength to avenge his father? 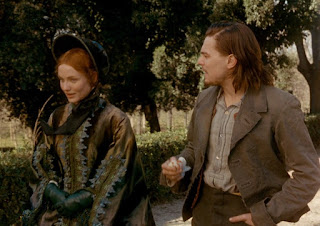 Gangs of New York is a really good film, but I can see why it didn't get any Oscar wins but nominations. Daniel-Day Lewis is amazing and he could have easily won the Oscar that year but he did lose to Adrien Brody for his role in The Pianist which was another amazing role. I also found it funny that his character hates Abe Lincoln as he became unbelievably like the great president himself in the movie Lincoln. The film lost Best Picture to Chicago which I'm not sure I agree with. I do like how it's based on history but they did change some of the names of the people it's based on. Any "history" movie is going to make changes so I can forgive "historical fiction" in a sense.  The story could have been a little better, it clocks in a little close to three hours so they could have shrank it a little.

This movie has been on my "to see" list for a long, long time. I'll get to it one of these days! I adore Daniel Day-Lewis.

A dark and brutal movie, but still compelling. I usually find Scorsese I bit too heavy-handed for my taste.

This is a good film and Day-Lewis is always excellent. The weak link is Cameron Diaz who was not that great in her part in this film. I thought, like you, it could have been edited down a bit

My husband and I saw this movie. I'd give it about the same rating as you.