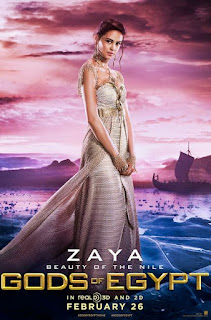 Gods of Egypt is a movie I only knew about for one reason, Nikolaj Coster-Waldau who is better known to American audiences as Jaime Lannister the Kingslayer in HBO's Game of Thrones TV series. The only other cast-member I recognized was Geoffrey Rush who plays the almighty god Ra.  To be honest, I didn't think Gods of Egypt would be a good movie since it looked like a mess, and critical opinion seemed to confirm that. Reviews were so awful that the director Alex Proyas called critics "diseased vultures pecking at the bones of a dying carcass". However I was still a little curious and wanted to see it regardless. Could Gods of Egypt be as bad as they say or were critics actually too harsh on this one? 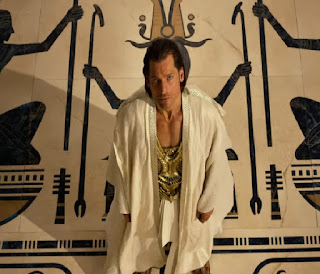 The film is set in an ancient Egypt where all the common people know of the gods and know for a fact they are real because they don't hide in the sky but are often seen by the public. The main hero is Horus is the son of Osiris and grandson of Ra. His powerful grandfather protects the world from dark beings, while his father Osiris rules Egypt on Earth. Osiris decides to pass down his power to his son on his own free will. During the ceremony, Osiris' brother Set comes with an army. While Horus hopes that his uncle is there to wish him well, Set tricks his brother and murders him. Horus and Set clash and Horus loses the fight. Set takes Horus' source of great power, his eyes. Horus while still a god, flees and lives in exile. 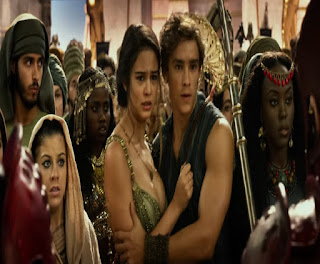 Set tells all the other gods on Earth to bend the knee or perish. He enacts new changes in his reign, and the common people must give up valuables to enter the after-life after they die. A young couple named Bek and Zaya become bitter pawns of the new rule which forced many of the common people into slavery. Bek attempts to free Zaya from her master, but as they flee she is struck by an arrow. Bek finds the disgraced Horus after recovering one of his lost eyes and makes a bargain. If Bek helps Horus get his other eye back and overthrow Set, then Horus must bring his beloved Zaya back from the dead. They'll only have a few days as the journey the dead must take happens in just a few days. As a penniless slave, Zaya will have a very grim fate is she reaches the late gate in the after-life thanks to Set's new rule. 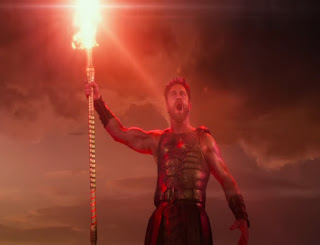 To be honest, Gods of Egypt wasn't as bad as I expected but still rather meh. The start and end are good but the rest isn't really amazing. I think one of the reasons why is Set is just stupidly over-powerful and the levels in powers between the gods isn't explained very well anyway. The relationship between Horus and Bek was interesting (along with the Bek-Zaya romance) by the end but the story wasn't really that thrilling. The special effects are cool (except the weird looking differences between the size of gods and mortals) but this movie was a lot of bad ideas rolled into one. At least it made me more familiar with the gods of Egyptian mythology as they are often over-shadowed by their Greek counter-parts.

Having low expectations probably helped you enjoy it more.

I usually enjoy movies like this but when we rented it we were so turned off we stopped it about a third of the way into it.