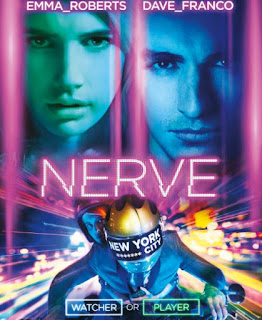 Last year I had no idea Nerve even existed. I came across it last month and saw the cover. It really reminded me of Tron with the special lights and the concept of the movie being about a game. The game isn't really Tron-ish but really social media meets truth or dare with lighting at times that reminds me of laser tag. I remember seeing Emma Roberts (daughter of Eric Roberts and niece of Julia Roberts) in 2007's Nancy Drew, and it is a little strange to see her still playing a teenager almost ten years later. The movie also stars Dave Franco who is the younger brother of the much more famous James Franco. The movie Nerve is based on a 2012 novel of the same name by author Jeanne Ryan. 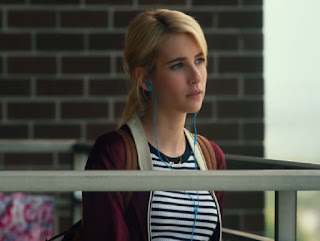 Nerve is set in the New York City area with the main character being a teenage girl named Venus "Vee" Delmonico. Vee lives with her mother Nancy, and she had a brother who had died and both them are still in grief about the ordeal. Vee is rather shy but still has a few friends at school. She likes a boy named J.P. but is too shy to let him know that she is interested. Her friend Sydney does it for her, and J.P. loudly lets Syndey know that Vee is not his type. She runs away embarrassed and a little ashamed. Sydney is not like Vee, as she plays a game called Nerve which has people on smartphones giving her dares to complete. She does a rather brave one during cheer-leading stunts at school and gets in trouble for it. 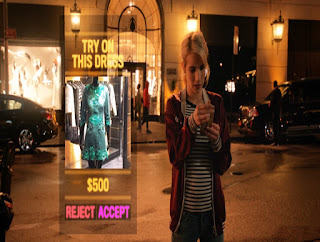 Vee decides to join Nerve instead of just being a "watcher". Her first dare is to kiss a random stranger. She ends up finding a guy named Ian, who ironically turns out to be a notable "player" of the game Nerve. The "watchers" like Ian and Vee and decide to give them "team" dares. Some of them are strange, like just trying on a dress at a clothing place. However most of them lead to crazier ones and Ian convinces Vee not to quit. The two quickly become the top players on Nerve as the night goes on, and most of the city's youth is keeping up with them. However Nerve has a deep dark side, and Vee might not be ready to confront the horrors that await her. Will she and Ian be able to handle the challenges? 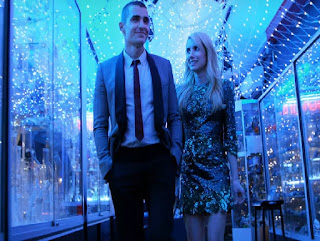 To be honest, I didn't expect Nerve to be the greatest film ever but it was still rather disappointing. The premise is unique and the concept works well at first. However the farther the story goes, the more the plot just feels rather dumb and non-nonsensical. Even though I didn't read the novel, from the summary there does seem to be many differences. One of the changes being that the novel is set in Seattle while the movie is in the Big Apple. My wife Daisy watched it with me, and she's very easy to please, but even Daisy had problems with the story. The movie did okay at the box office, but I really hope they don't try a sequel. It's not a horrible story, but it's extremely flawed. I also thought the romance between Vee and Ian felt so cheap and fake.

It didn't look like a great movie so I never watched it.

I never watched it! Oops!

My daughter said this was one of the dumbest movies she ever watched. I think she'd give it an F.

Yay, Daisy! I'm easy to please when it comes to movies too!