Question: Does Trump's Hatred of the Media Concern You? 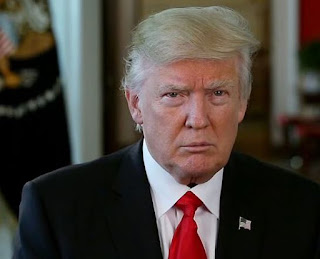 Donald Trump took some very extremist stances running for president, and now he's taken an extremist stance on "the media" which he named as typical outlets like NBC, CBS, CNN as "fake news" and also "enemy of the American people".

History/Government 101 teaches us that the bedrock of democracy is a free press. The White House has refused to let in any media journalist they don't like into press briefings. Now Trump is apparently skipping The White House correspondents dinner probably because they've always poked fun at the siting president. This is kind of the stuff we see happen in the 3rd world, not America.

Does Trump's actions concern you?
Posted by Adam at 12:00 PM

Yes..it is concerning because whenever you look back in history to any Fascist or Communist regime, the media was the first outlet to be curtailed. This is only the start and people better take notice but, unfortunately, there are many people who love Trump and will find every thing he does and cite why it is a good thing. This is not a good thing

Yes, it is concerning.

Yes and no. I'm in no means defending him, but the media is constantly manipulated either through exaggeration or by being taken completely out of context. It's done to control the general public and guide us through whatever road they want.
However, we live in a time where people should be smart enough to know not to believe everything they read and hear; hence why his hate towards the media doesn't concern me that much. His presidency also did something that even Obama couldn't fully do: The hate on Trump is so so strong that it brought people of all ethnicities and religions together.

"...the bedrock of democracy is a free press." That pretty much summarizes how I feel.

Marginalizing the media is the first thing a tyrant does to solidify power and eliminate criticism and accountability. Yes, I'm concerned.

What is he doing behind closed doors that he doesn't want the American people to know or the world for that matter?
Then the press are sometimes not nice people either.

Adam, the press can be a bloody nuisance at times but without a FREE
press you end up with papers like the following put in place
to pursue their agendas:
1."Der Sturmer" and "The Volkischer Beobachter" of Steiner the former, and Goebbels, the latter.
2. "Pravda" and "Izvestia" of Joe Stalin's Soviet times.
3. "Xinhua news" and " The People's Daily" of Comrade Mao and Mme.
Mao and her Gang of 4 mob of Red China.

Be careful the next Trump move might be "Youths for Trump".
Now lets envisage the uniforms - Right arm, the Swastika.
The left Arm, the Hammer and Sickle and for headwear a lovely red cap with a prominent yellow star in the centre.
Wow what parades will be witnessed in the Texan cities and towns and the best forgotten Springfields of the USA.

We have a TV programme here which came into being with this strange
US elections - it is called "Planet America". Supposedly the Oval Office and the antics now of Turnip Top and his cretin advisors and appointees. Thank your lucky stars that the Canadians and the Mexicans haven't got rights to it. The raucous laughter coming from your northern and southern neighbours would result in a boom in ear plugs sales.
The man is making that "Pip Squeak" in North Korea look normal.
Have fun but please don't export this latest US madness.
Colin

I do think his dismissive attitude towards the press is an issue. He is the President and should have a thick skin instead of targeting a group of people that is doing their best to report the truth to the public.

It would be nice if the media would just tell us the news without their slant on it.

I'm not even American, but seriously, everything Trump has done so far and what the White House has turned into is a concern. I agree with what Jon Stewart said in the Colbert show...time for the media to get its act together. i say just refuse to even mention his name and just say "so-called President"....that would drive him bonkers! His ego won't be able to take it. The latest thing with the Sessions issue....argh!

Can't you decipher between the slants of the reporters be they left of centre, right of centre, down the middle or of the extreme versions of the left or right. God did give us brains,
use them.
Colin

#45 concerns me greatly in everything he does! His supporters also concern me. What is the matter with them? Can't they see?