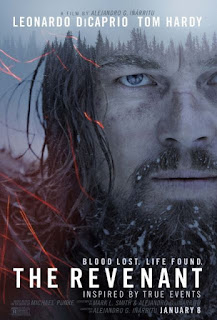 The Revenant is certainly a movie that caught my eye thanks to the Academy Awards last year. This is the film that finally got Leonardo DiCaprio an Oscar after so many years and nominations. But other than that I didn't know very much about the movie. I heard of the bear scene, and that seemed to be the only thing people talked about when they brought up the movie. Is the movie a 2 hour-plus tale of a man vs a bear? Thankfully no, it's actually a "historical" film based on the life of adventurer Hugh Glass. But often enough Hollywood does twist history, as I later learned that a lot of details in the movie are 100% made up. It lost the Oscar for Best Picture to Spotlight (which I still haven't seen) but was it worthy of the hype? 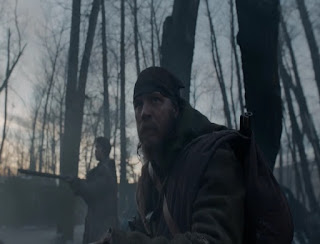 Set in 1823, The Revenant starts with a group of fur-traders who are in pretty "unknown" territory of North America. They are attacked by surprise from a vengeful group of Arikara Native Americans. After a few causalities, most of the crew escapes through the river. A man named Hugh Glass along with his half-Native American son Hawk are the guides and because of their knowledge and tactics managed to save most of the men there. Not all men are thankful to Hugh Glass however. Some show disrespect to his "half-breed" son, and a man named John Fitzgerald makes it pretty obvious that he doesn't care much for him. 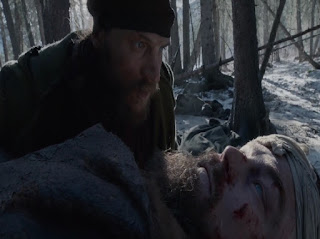 However Hugh Glass is attacked by a grizzly bear, and he is left in very critical condition. The group's leader Andrew Henry feels like he owes a life debt to Hugh Glass and offers a mighty reward for any man who stays to help him recover and move away from the Native Americans who are probably after them. The ones who stay are Hawk (obviously), a young man named Jim Bridger, and John Fitzgerald who is only there for the reward. However when the threat of Native American attacks, John Fitzgerald gets rather paranoid and more than willing to leave Hugh Glass for dead. He tries to murder him but stopped by Glass' son Hawk whom is stabbed to death. Fitzgerald makes up a story and convinces Jim Bridger to flee with him leaving Hugh Glass behind. Against all the odds, can Hugh Glass survive and will he get his revenge? 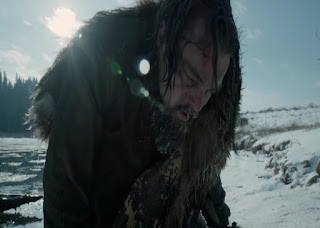 Overall The Revenant is a pretty good film, but perhaps a little over-rated. It does seem like it takes forever at times, and some of the things Hugh Glass survives are unbelievable. Leonardo DiCaprio does an amazing job as Hugh Glass but not so much his lines or his story but you can ol' Leo suffered a lot to make things authentic. Tom Hardy is also incredible as John Fitzgerald, I'm really surprised he didn't pick up as Oscar win for this one, though he was at least nominated. It's a really good movie, but if they had shrank the story, and went a little more realistic it may have won the Oscar last year.

The HH liked this. I didn't watch it. Not my cup of tea.
Glad you enjoyed it though:)

My husband loved the movie but thought it was too long and a little 'dull' in spots. Glad you liked it overall.

We enjoyed it. We were rooting for the grizzly.

The grizzly was all computer animated apparently. It is a brutal, stark film but i enjoyed it and loved the ending when you realize he may have been dead all along but revenge kept him alive

I have not seen this one. Looks like a good movie. So many new ones come out it's easy to forget "old" ones.

We thought it was okay. Maybe a little overrated, as you say. I wanted the grizzly to win.