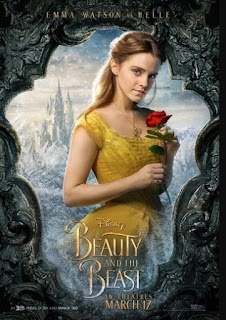 Beauty and the Beast is one of the most classic fairy tales and one of Disney's best animated features. Now that remaking them is cool and whatnot, it was time for Beauty and the Beast to get the same treatment. I knew this was coming at least a few years ago and I was a bit dubious on the casting of Emma Watson as Belle. I grew up seeing her as Hermione Granger (even though I didn't watch Harry Potter until much later on) and unlike other men my age (I'm about 2 years older than Watson) I never had a crush on her. She's certainly not a ugly woman by any means, but I always saw her like a little sister for some reason. Even with her in costume, she never wowed me as Belle as Lily James did as Cinderella. I was really excited about Dan Stevens as The Beast. I knew him as Matthew Crawley from Downton Abbey and I was really upset when he left the show. 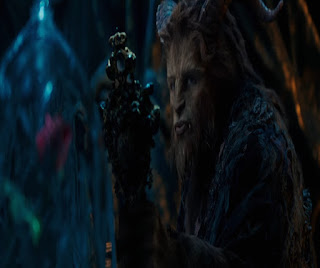 For those who fondly remember the cartoon version, there's not much new to the story here. But to those who haven't seen it, the movie is about a prince who was cursed. He grew up to be a bitter and vain young man. After turning away an old hag with nothing to offer but a rose, she turned out to be an enchantress who was testing him. For his dark heart, she turned him into a hideous monster and the rest of the castle's residents were turned into beings that are basically now moving furniture pieces. A magical rose has been placed and the Prince/Beast must fall in love and have someone return the affection before the last petal falls. If the rose "dies" before then, everyone in the castle will be cursed for eternity. 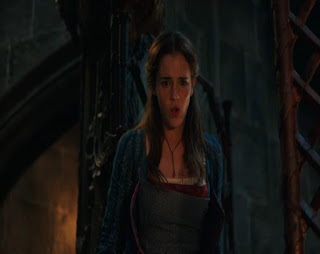 In a nearby village, a girl named Belle is considered a "freak" because she's way ahead of her time. She knows how to read and is not worried about finding a husband. A handsome but vain man named Gaston is smitten with her and tries everything his small mind can do to win her hand. She refuses him to his frustration. The only man in her life is her father Maurice, and he goes out of town and is tasked by Belle to bring back a rose. However Maurice stumbles upon the cursed castle and is taken prisoner for "stealing" the flower. Belle finds where her father has been captured and offers The Beast the chance for her swap places with her father. Now Belle must remain the castle forever or until the curse is broken. 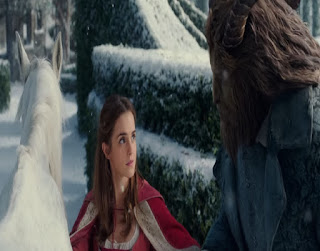 I will say the Beauty and the Beast remake isn't quite as good as Cinderella's remake. Emma Watson still isn't my first choice for Belle. But the story is predictable since we've all seen it once before. Though I really liked the final scenes and the happily ever after. I will say the house servants don't quite translate as well over here as they did in the cartoon version. But it's still a really good movie and I can't really complain too much about it. I'm still looking forward to many more Disney live-action remakes to come in the next many years.

I figured it was mostly hum drum. What the live action craze is.

I guess as a guy without small children I haven't been drawn to this remake.

Don't think I saw the Cinderella remake. Thx for this review. I loved the film.

I haven't seen this or the Cinderella remake. Thanks for the review.

Thanks for the review, Adam. I'm going to look for this. I love the story of Beauty and the Beast, but I'm so out of it I didn't know there was a remake with real people. LOL

Actually I LOVED this Beauty and the Beast and I really liked Emma Watson in the role though I wondered about the choice at first too. I'm going to give it an A. :-)

I wasn't overly impressed with the movie. I'm not sure I liked Emma as Belle, though I have liked her past work. I wasn't a fan of Cinderella either, but Jungle Book got 2 thumbs up from me.

I love the new remakes of Cinderella and Beauty and the Beast! I think they're both beautiful. The music, the writing, all very good. But yes, Emma Watson...? She said she was so thrilled to get the part of Belle, but through most of the movie, she looks soo bored. I do like the cartoon version of Belle better. But Lily James did great in bringing Cinderella to life, her longsuffering, her kind spirit, very well done!