Fact of the Day: Bonaparte Judaism 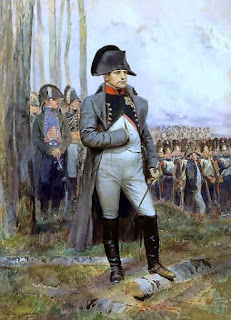 When Napoleon Bonaparte seized power in France, one of the groups that benefited the most were the Jewish population of France and other countries that Napoleon conquered. He lifted restrictions that kept them in ghettos and gave them equal rights on par with other French citizens. The Russian Orthodox Church (along with other Christian groups) were not very happy, and they even went far enough to formally condemn Napoleon as "Antichrist and the Enemy of God".
Posted by Adam at 12:00 AM

Email ThisBlogThis!Share to TwitterShare to FacebookShare to Pinterest
Labels: Christianity, fact of the day, france, Judaism, Napoleon Bonaparte I, russia

Seriously? I didn't know that!

This is really interesting, I had no idea!

Yes, this was one of the benefits of Napoleon's rule. There weren't many.